Sri Lanka performed better in the second session as compared to the first one in the ongoing Test against Pakistan. Abu Dhabi so far has been Pakistan s fort, where they are yet to lose a Test). However, they were handed a tough time by Sri Lanka pair, Dimuth Karunaratne and Dinesh Chandimal. They resurrected a stammering innings from 63 for 3 to 143 for 3 going into tea.

It was the well-set Karunaratne who held one end up, while the experienced Dinesh Chandimal tackled a probing attack. Karunaratne slowly but steadily reached his fifty in 114 balls, his 13th overall. This was his fourth 50-plus score in the last 5 Tests.

Chandimal, along with Karunaratne, added 50 runs for the fourth wicket in 126 balls. It was tough time for Yasir Shah, Haris Sohail and Hasan Ali to bowl in sultry heat at Sheikh Zayed Stadium.

Winning the toss, Sri Lanka opted to bat and were rocked by Yasir and Ali. Yasir snatched two wickets in the morning session, including his 150th Test scalp. Kusal Mendis helped Karunaratne for a brief period, but got out a ball before lunch. 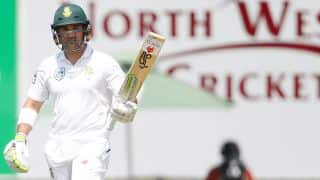 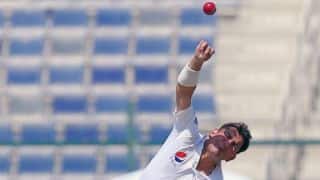