Sri Lanka s tryst with injuries continued as former captain Angelo Mathews was ruled out of the 2-Test series against Pakistan. Mathews, who was reported to miss only the first Test was confirmed to have a grade-one tear in his calf. Mathews suffered an injury during a training session.

According to island.lk, Mathews is eager to get rid of his injury woes and be completely fit before any more participation. He is expected to be fit before the second Test at Dubai, but the Sri Lankan management is not taking any chances. He has been unlucky with calf, hamstring and ankle injuries across the season that has truncated his national participation.

The first Test will be played at Abu Dhabi. Sri Lanka are scheduled to play their first-ever day-night Test at Dubai against Pakistan as well. They will leave for UAE on Sunday.

The Test series will be followed by a five One-Day International (ODI) and three Twenty20 International (T20I) series. Sri Lanka are already missing key players like Asela Gunaratne and Kusal Perera due to injuries.

Post the Pakistan series, Sri Lanka are slated to tour India for a six-week tour that includes Test, ODIs and T20Is. 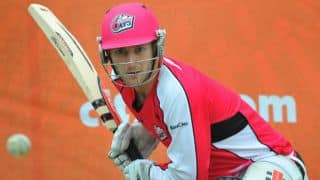