Pakistan reached 141 for four from 28 overs, chasing 297 to win against Sri Lanka

Misbah-ul-Haq is key to Pakistan’s chase as they reached 141 for four from 28 overs, chasing 297 to win against Sri Lanka in the opening match of the Asia Cup 2014.

Misbah and Sohaib Maqsood had steadied Pakistan, as they reached 38 runs from 10 overs after losing quick wickets early on. However, Maqsood’s dismissal in a bizarre manner put Pakistan under more pressure.

Maqsood went after a very short delivery from Sri Lanka spinner Sachithra Senanayake, but found the fielder at deep midwicket. He scored 17 off 27 balls. Pakistan require 156 more runs to win from 22 overs.

This was after Sri Lanka fought back with quick wickets in form of Mohammad Hafeez and Ahmed Shehzad as Pakistan slipped to for three after 14 overs. While Shehzad was cleaned up by Chaturanga de Silva for 28, Hafeez was trapped in front of the wickets for 18. This was after Shehzad and Hafeez lead Pakistan’s recovery with their 49-run stand for the second wicket. 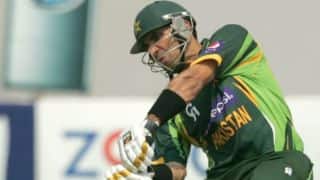