The tenth and the last match of the Asia Cup T20 2016 group stage will see the mercurial Pakistan take on a declining Sri Lanka at Dhaka.

The tenth and the last match of the Asia Cup T20 2016 group stage will see the mercurial Pakistan take on a declining Sri Lanka at Dhaka on Friday, March 4. Already being reduced to a dead rubber because of both teams’ poor show in the tournament, the match is inconsequential as far as the bearing on the tournament is concerned. However, it does offer one last chance to both the teams to salvage some pride and confidence ahead of the all-important ICC World T20 2016 in India that starts within a fortnight. Both Sri Lanka and Pakistan will like to end on a high after an early exit. FULL CRICKET SCORECARD: Pakistan vs Sri Lanka, Asia Cup T20 2016, Match 10 at Dhaka

Sri Lanka lost out to India and Bangladesh and managed to register a solitary win in the tournament against lowly UAE. The team has been going through a period of transition after the retirements of Mahela Jayawardene and Kumar Sangakkara. An injury to regular captain Lasith Malinga only added to their problems as the island nation struggled to put together a team that could look like one to beat. The newcomers have not come good and the management will have to be patient with them. The seniors, during this tough phase, need to take more responsibility.

For Pakistan, the story has been pretty similar. They too went down to arch-rivals India and Bangladesh and beat UAE but not before the minnows gave them a huge scare. All the hype around PSL fizzled out as the team could not translate their T20 momentum into international success. Further, they did a lot of chopping and changing with their squad, and added a couple of players who did not do well. This only made matters worse. Failure of skipper Shahid Afridi also played a huge role in early exit. The last league match gives them a chance for redemption. Asia Cup T20 2016: Pakistan, Sri Lanka to play for pride in final league tie

Since the crowd’s favourite Bangladesh will not be playing, do not expect crowds to turn out for the dead rubber. THe India vs UAE clash witnessed a similar scenario, with spectator turnout being very poor. The match will start at 7 PM Indian Standard Time (IST), and pitch is expected to assist the bowlers early on and later the batsmen, as the dew will come to play its part. Considering this, toss will be an important factor in the match. Sri Lanka will look to Angelo Mathews, Rangana Herath, Dinesh Chandimal and Dinesh Chandimal to play key roles for them. On the other hand, Pakistan will look up to their seniors Mohammad Hafeez, Shoaib Malik and skipper Shahid Afridi for inspiration. 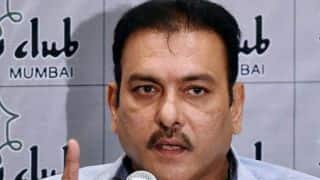