(Pakistan take on Sri Lanka in the final of the Asia Cup 2014 tournament. Sri Lanka have been unbeaten in this tournament and Pakistan, will be desperate to maintain their hold on the Asia Cup trophy. Catch live cricket scores of the match in our live blog below.)

Sri Lanka 261/5 | Overs 46.2
Mathews 16(13), Chaturanga 6(9)
There it is, A boundary and a couple from Mathews finishes off the final. Fifth Asia Cup win for Sri Lanka and first since 2008. Brilliant victory. Lasith Malinga started with a five wicket haul. His three wickets in consecutive overs at start set up the match and with 260 to chase, Jayawardene plays a matured innings along with Thirimanne. At least Lanka can behind the final blues.
Sri Lanka 255/5 | Overs 46
Mathews 10(11), Chaturanga 6(9)
Mathews picked a single on the second ball. Junaid delivers a leg-side delivery and Chaturanga guided it behind the wicket for a boundary.
Sri Lanka 248/5 | Overs 45
Mathews 9(9), Chaturanga 0(5)
And there it is. Thirimanne is bowled by Ajmal for 101. Chaturanga is the new batsman in. Ajmal tosses one up but he defends it. A serious Ajmal indicates to the batsmen he could have lofted it out of the park!
OUT! Thirimanne 101(108)

Pakistan’s all three fast bowlers have conceded runs at Economy Rate of 6.00 or more in this innings. #AsiaCup

Sri Lanka 148/2 | Overs 26
Thirimanne 64(63), Jayawardene 40(55)
Pakistan fielding has been a touch lazy. The tight singles have been made to look comfortable for Lanka. Three runs from that over from Junaid Khan.
Sri Lanka 145/2 | Overs 25
Thirimanne 62(59), Jayawardene 39(53)
Mohammad Talha has been pretty ordinary. Wayward line and Thirimanne flicks it for a boundary. Five singles in the other five deliveries. Easy runs for Sri Lanka. The partnership is blooming. Time for Ajmal or Gul to come back?
Sri Lanka 136/2 | Overs 24
Thirimanne 55(55), Jayawardene 37(51)
Pakistan are busy considering easy runs. Talha stops the fifth ball with his legs, Sharjeel backs him and fails to collect the ball cleanly. The batsmen run three! Five runs overall from that Junaid Khan over.

Lahiru Thirimanne’s career ODI average is 30.26. Against Pakistan it is 47.00 after 9 ODIs. #AsiaCup

Sri Lanka 131/2 | Overs 23
Thirimanne 51(53), Jayawardene 36(47)
Half-century for Jayawardene. On the first ball of the over by Talha, he deliberately places the ball past the vacant slip region for a four. Picks a single on the next ball to complete fifty. Sri lanka require 130 runs in 27 overs.
Sri Lanka 122/2 | Overs 22
Thirimanne 45(50), Jayawardene 33(44)
Jayawardene starting to play his trademark shots, the third ball of the over by Afridi is delicately placed to the right of short thirdman for four.

He does not have to walk just coz Akmal appealed. RT @usamamunirdar: Are you going to advise Mahela to walk?”

First time in his ODI career spanning 350 inngs Shahid Afridi came out to bat but ended without facing a ball! #AsiaCup #PakvSL

Pakistan 260/5 | Overs 50
Fawad 114(134), Afridi 0(0)
Malinga bowls the last over. The first ball is played in the gap for a couple. Singles on the next two balls. Akmal then goes for a big heave and the leading edge flies in the air, caught well by Priyanjan. Seventh five-wicket haul for Malinga. Fawad Alam ends at 114 in 134 balls.
OUT! U Akmal 59(42)
Pakistan 251/4 | Overs 49
Fawad 108(131), U Akmal 56(39)
It was a relatively quiet over from Lakmal but the last ball of the over was a full toss and Fawad lofted it, lands safely and runs to the boundary.
Pakistan 243/4 | Overs 48
Fawad 102(128), U Akmal 54(36)
Maiden ODI hundred for Fawad Alam. He flicks the first ball of the over by Thisara Perera for a six over midwicket and gets to his ton. On the fifth ball Akmal squeezes a fuller delivery past short thirdman and point for a boundary. Gets to his fifty. The last ball is smashed to the right of mid-off for a boundary. Hundred partnership comes up.

Interesting reaction from Misbah there! Wonder if such reactions are also looked at by the match referee 🙂 #PakvSL

Pakistan 58/3 | Overs 21
Misbah 20(48), Fawad 20(52)
Bruce Oxenford grants Misbah a life! The third ball of the over by Thisara Perera is at a good length and Misbah tries too guide it to thirdman without much footwork. He gets a faint edge and Sri Lankans were yelling for that to be given out. Bruce Oxenford turns it down. Misbah looks up to the sky and laughs. Two runs from that over.
Pakistan 56/3 | Overs 20
Misbah 19(43), Fawad 19(51)
Three singles from that over. Misbah hasn’t been very free-flowing, still finding tough to find the gaps. Nevertheless, two medium pace seamers Perera and Mathews have done a good job.

Arun Lal produces a stat mantra for Pakistan:  Whenever Misbah gets run-out, Pakistan have never lost. Six wins and one tie so far! Wonder whether Pakistan would want to watch that heartbreak for the third time in a single tournament.

Pakistan 53/3 | Overs 19
Misbah 17(38), Fawad 18(50)
Fawad hasn’t timed the ball well today. Once again plays a shot but the ball doesn’t travel far coming from the bottom half of the bat. Mathews has been excellent along with Perera. Just two runs from it.
Pakistan 51/3 | Overs 18
Misbah 16(36), Fawad 17(46)
Singles on the second and third ball. A run each to Fawad and Misbah. On the fourth ball, Fawad runs after a wide one, gets a bottom edge and runs towards Sangakkara. And umpire Nigel Llong signals it as wide! Some issue with umpires hearing the nick in this tournament. Has happened more than once now. Fifty up for Pakistan.
Pakistan 45/3 | Overs 17
Misbah 13(34), Fawad 15(42)
First ball after drinks break is worked towards thirdman by Misbah for a single. Fawad gets a single on the fifth with a flick shot.
Pakistan 43/3 | Overs 16
Misbah 12(32), Fawad 14(38)
Msibah picks a single on the second ball playing past point. Fawad with his shuffling stance finds it tough to get his shots past fielders. Gets a single on the fifth ball playing towards the vacant midwicket region. The last ball is worked by Misbah for a single. Three runs from the over. Drinks Break.
Pakistan 40/3 | Overs 15
Misbah 10(29), Fawad 13(35)
It’s customary of Pakistan these days to be involved in run-outs. Fawad plays the penultimate ball from Mathews towards mid-on and runs for a single. Misbah had sent him back in time and Fawad casually ambles back. Could have been tight. Earlier Fawad had picked a couple with a flick on the third ball.
Pakistan 38/3 | Overs 14
Misbah 10(29), Fawad 11(29)
The first ball by Perera is played uppishly by Fawad towards thirdman and takes a single. Misbah is watchful on the remaining deliveries. He comes down the track on the fufth ball but doesn’t go after the ball.

Pakistan 37/3 | Overs 13
Misbah 10(24), Fawad 10(28)
After an ordinary over from Senanayake, skipper Angelo Mathews comes in to bowl. Shortish run-up and medium pace. Misbah is tied down. Maiden over again.
Pakistan 37/3 | Overs 12
Misbah 10(18), Fawad 10(28)
Maiden over by Thisara Perera who replaced Suranga Lakmal. Fawad Alam finds it difficylt to work the ball away. Good line maintained by Perera in his first over.
Pakistan 37/3 | Overs 11
Misbah 10(18), Fawad 10(22)
The first ball is worked away towards midwicket by Fawad for no run. The second ball is short and wide by Senanayake, Fawad slaps it past point for a boundary. He picks a single on the fifth ball. On the last delivery, Misbah plays a confident drive through the extra-cover for a boundary. Nine runs from the over.
Pakistan 28/3 | Overs 10
Misbah 6(17), Fawad 5(17)
Suranga Lakmal continues. The third ball is worked away by Misbah for a couple. Good effort by the deep backward squareleg fielder. On the next ball he taps the ball towards midwicket and sprints for a single.
Pakistan 24/3 | Overs 9
Misbah 3(13), Fawad 4(15)
It’s been a pattern of Mathews’ captaincy to bring in Senanayake early on. Fawad Alam plays a beautiful cover-drive on the third ball for a boundary. Well timed. It was flighted and the batsman was not afraid to go after it.

Three wickets for 18. All three batsmen out for rash shots. Misbah battling it out! Isn’t this the erratic version of Pakistan. Meanwhile on the other side, the curly haired Malinga is back to bowling the inswingers and fuller deliveries.

Pakistan 20/3 | Overs 8
Misbah 3(13), Fawad 0(9)
Misbah-ul-Haq cautious against Suranga Lakmal. He bowls at a good length. Doesn’t concede any drivable deliveries. Maiden over.
Pakistan 20/3 | Overs 7
Misbah 3(7), Fawad 0(9)
Malinga continues. The first ball is towards the leg-side. Misbah works the second ball towards midwicket for a single. Fawad Alam with his shuffling stance looks like a prime candidate to be a victim for Malinga’s fuller deliveries. Does well to defend but he is yet to get off the mark.
Pakistan 19/3 | Overs 6
Misbah 2(5), Fawad 0(5)
Suranga Lakmal is doing a good job keeping it tight from the other end. Misbah survived on the third ball. It cut back in and almost kissed the bails. He picks a single on the fourth ball. Fawad Alam with his unorthodox batting stance manages to see off the last two.

Lasith Malinga in his last 29 balls has picked up 8 wickets for 21 runs in his last two ODI games against Pakistan! #AsiaCup #PakvSL

Pakistan 18/3 | Overs 5
Misbah 1(1), Fawad 0(3)
Malinga is surprised now! Pakistan and conceding easy wickets. Hafeez is squared up against a good length delivery and blindly keeps his bat dangling. The edge is taken by Sangakkara. Fawad Alam, the new batsman shuffles across on the first ball and almost got out leg-before.
OUT! Hafeez 3(13)

Pakistan 17/2 | Overs 4
Hafeez 3(1), Misbah 0(0)
Dropped! Hafeez almost had a brain freeze situation. The second ball was cut straight past point. Senanayake dives and gets both hands to it but fails to keep it under control. Hafeez was beaten going for a straight drive on the fourth ball. Maiden over from Lakmal. Pakistan need to relax
Pakistan 17/2 | Overs 3
Hafeez 3(5)
Malinga’s disciplined line forces Hafeez to go on the defensive. The last ball is flicked well towards the midwicket boundary. A relay through saves the boundary but the batsmen run three. On the last ball, Shehzad goes for a drive on the up. Poor thinking. Plays far away from the boundary and the edge is neatly collected by Sangakkara.
OUT! Shehzad 5(7)

Pakistan 14/1 | Overs 2
Shehzad 5(5), Hafeez 0(1)
Shehzad’s first scoring shot is a slash over point and runs towards the boundary for four. He follows it up with another crisp drive through covers but Ashan Priyanjan does a brilliant job to get a hand to it. Hafeez picks a single through a wayward legside delivery. The last ball is a yorker and well defended by Shehzad.
Pakistan 8/1 | Overs 1
Shehzad 0(0)
Entertaining start to the final! Malinga was been jolted as he started off with an over-pitched delivery. Sharjeel drives it on the up between point and cover for a boundary. He defends back to the bowler on the second and then punch one off the backfoot for a boundary through the off. The last ball was the typical full inswinger from Malinga, Sharjeel flicks it straight to Thisara Perera at mid-on.
OUT! Sharjeel 8(6),

Toss:  Pakistan have won the toss and elected to bat first

Sharjeel Khan replaces Shoaib Maqsood, Junaid Khan comes back for Abdur Rahman. Big decision from Sri Lanka, Suranga Lakmal stays in the playing XI but Ajantha Mendis is out! And Lasith Malinga is back.

Hello and welcome to CricketCountry’s coverage of the final of the Asia Cup 2014. Pakistan, the defending champions, will take a rampaging Sri Lankan side in the summit clash of this edition of the tournament.

Pakistan have been struck with injuries as their star players Shahid Afridi and Umar Gul are nursing niggles, alongwith their opening batsmen Sharjeel Khan and Ahmed Shehzad. Sri Lanka, on the other hand, will be riding high on confidence as they have not lost a single game in the tournament so far. This is Abhijit Banare, and I will be bringing you over-by-over updates of this match.

Read the preview of the Asia Cup 2014 final here. 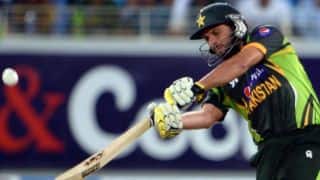