The live cricket streaming of Day 3 of Pakistan vs Sri Lanka 2017-18, 2nd day-night Test at Dubai, will be available in India on Sony LIV.

Dimuth Karunarathne’s fighting 196 lifted Sri Lanka’s spirits on Day Two of the second Test at Dubai. Pakistan trailing by 431 runs, ended their day at close at 51 for no loss. Openers Sami Aslam and Shan Masoon remained unbeaten on 30 and 15 respectively. Pakistan still need 231 to avoid the follow on. The live cricket streaming of the match will be available in India on Sony LIV, while the live telecast will be available on Sony Six HD. In Pakistan and Sri Lanka, the streaming will be available on tensports.com, along with the live telecast on Ten Sports. For commentary and live updates, you can follow CricketCountry’s live scorecard.

It was another brilliant display by the Sri Lankan batsmen led by Karunaratne. He deserved a double hundred during a marathon nine hour stay at the crease but he was unluckily dismissed, playing onto leg-spinner Yasir Shah just before dinner. Karunaratne hit 19 boundaries and a six, improving on his previous best Test score of 186 made against the West Indies at Galle two years ago. When on 143 he brought up his 3,000th run in his 44th Test, the 12th Sri Lankan to reach that milestone.

Shah took 6 for 184 in a marathon 55.5 overs of hard work and toil on a flat Dubai stadium pitch. His haul makes him the only spinner ever to take five or more wickets in five consecutive Tests.

Karunaratne added 146 with skipper Dinesh Chandimal (62) for the fourth wicket before another 88 were put on for the fifth between him and Niroshan Dickwella, who made a rapid 52.

As if that was not enough, Karunaratne put on 59 for the sixth wicket with Dilruwan Perera, who scored a polished 58. Resuming at 254-3, Sri Lanka lost Chandimal to a leg before decision off Yasir. Glenn Maxwell close to breaking his run drought ahead of The Ashes 2017-18, opines Aaron Finch 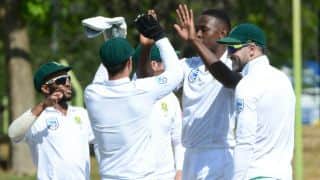