Sri Lanka visit Pakistan to play the third and final T20I at Lahore.

The past few months have been excellent for Pakistan: they won a Test series in West Indies, the Champions Trophy in England, against the World XI, and after a hiccup in the Tests against Sri Lanka, they came back strongly to demolish them in the ODIs. Another notable event for Pakistan this year was the return of international cricket back home. Now with the Twenty20 International series against Sri Lanka given green signal, skipper Sarfraz Ahmed has expressed his desire to lift the trophy in front of a packed Lahore stadium. Sarfraz told Cricbuzz: I am very happy because we will be playing at home and if we can go on to lift the trophy in front of our fans then nothing like that.

On T20 cricket: T20 is one format where you can t say one team is favourite. They [Sri Lanka] have a new team but in T20s the team that plays well on the day can make the game interesting. Our focus is on the first match as it is always important to start on a high and then target the remaining matches.

On being approached for spot-fixing: “Obviously I did my duty by informing. I was not scared when I informed about it, but became scared after I saw myself on the television. There was so much talk about it on the television that made me scared. But by the grace of god everything is getting normal. When you are going into a series you need to be normal and everything is going good so far.”

On new talent coming to the Pakistan squad: It is good that whichever the players we are giving chances are performing and it shows how much talent we have in Pakistan cricket. All the players selected are looking to prove a point. Usman Khan came and performed well. Faheem Ashraf also performed well. It is good that we have strong bench strength and it has become difficult to decide which bowlers have to be included and whom to be rested.

The first T20I will be played on Thursday, but all eyes will be on the third match at Lahore. 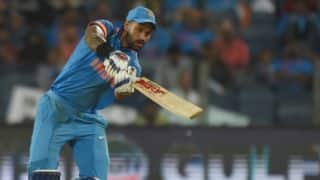