Jason Holder and Devendra Bishoo have scored vital 55 runs of 68 deliveries for the 8th wicket enabling the hosts to reach the 250-run mark which looked unlikely given the way the hosts started off the proceedings.

West Indies finished Day One of the ongoing first Test at 244 for 7 against Pakistan at Sabina Park, Kingston. Bad light forced early stumps on the first day with 9 overs remaining as West Indies skipper Jason Holder and spinner Devendra Bishoo remained unbeaten on 30 and 23 respectively. Both Holder and Bishoo have added vital 55 runs of 68 deliveries for the 8th wicket enabling the hosts to reach the 250-run mark which looked unlikely given the way the hosts started off the proceedings. For Pakistan, Mohammad Aamer remained the best bowler picking up 3 wickets conceding just 28 runs in his 19 overs. Spinner Yasir Shah picked up 2 wickets while debutant Mohammad Abbas and Wahab Riaz took a wicket each. Live Cricket Scorecard, Pakistan vs West Indies, 1st Test, Day 1

West Indies began the last session with 143 runs on the board having lost half their side. But they had Roston Chase and Shane Dowrich batting on 47 and 27 runs respectively and they had already put up a 72-run stand to withstand the West Indies innings which was crumbling at 71 for 5 at one stage. Both these batsmen continued with the same momentum in the third session and grew in confidence as the overs went by. Dowrich who had been clumsy initially in the second session too scored runs freely alongside Chase putting up 118-run stand for the 6th wicket. Live updates: Pakistan vs West Indies, 1st Test, Day One

It was the 69th over from Yasir Shah which changed the game’s scenario. Chase was caught off by Wahab who took a stunner one-handed backwards running catch near the boundary rope. Soon on the next delivery, Yasir cleaned up the timbers of Dowrich who lost his concentration. Completely against the run of play, West Indies who were soaring high owing to 118-run partnership were pulled down to 189 for 7.

It seemed as if Pakistan would seize this opportunity and clean up the hosts tail in no time. But Holder and Bishoo who also averted Yasir s hat-trick counterattacked Pakistan bowlers, scoring at almost 6 runs per overs (RPO). They both went all guns blazing against Yasir who looked in top form having taken 2 important wickets.

Rain has been predicted throughout the five days of the game, but if not rain the light had started reducing almost 15 overs before the stumps. But the umpires opted to play under the lights – also both these teams have played each other in UAE under lights.

But soon the light started deteriorating and the umpires had to take the decision of calling the day off 9 overs before the usual end of the game.

Earlier in the day, West Indies were asked to bat first by Misbah-ul-Haq who won the toss. The Pakistan pace trio of Aamer, Abbas and Wahab justified captain Misbah s decision quickly by getting the top-four West Indies batsman early in the innings.

In-form Kraigg Brathwaite (0), Shai Hope (2), debutants Shimron Hetmyer (11) and Vishaul Singh (9) were back in the dressing room with just 53 runs on the board. Kieran Powell displayed some determination in the first session but was eventually dismissed on the second delivery of the first over in the second session by Aamer. West Indies were caught in a tight spot at 71 for 5, but patient batting from Chase and Dowrich propelled the hosts to 189 which never looked on the cards. 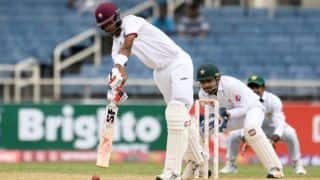 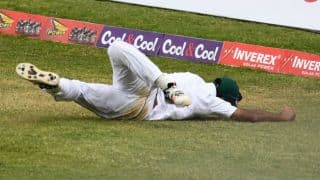