For West Indies, the equation is simple. They need to get wickets in the first hour of Day Four. The more Pakistan wickets they end up taking in the first session, the more dominance they will earn on this series opener.

The Day Three of first Test between Pakistan and West Indies was largely dominated by Younis Khan and his 10,000 Test runs. There remained apprehensions if he will score them on Sunday or not given the way he started off taking 19 deliveries to score his first single. But once done with that, it was just the way it was supposed to be. Younis did not look nervy and scored runs at ease. Babar Azam on the other hand knew his role. He had to keep the scoreboard ticking and avoid playing rash shots. He knew there was a maiden hundred for the taking. But then Shannon Gabriel came and stole away the show. He, in a matter of 7 deliveries, got both these batsmen, inviting two new batsmen in the dying minutes of the day. FULL CRICKET SCORECARD: Pakistan vs West Indies 2017, 1st Test at Jamaica

Misbah-ul-Haq and Asad Shafiq managed to survive the short-ball therapy from the West Indies pacers and eventually saw the day off at 201 losing 4 wickets. Both Misbah and Shafiq are batting at 5 and are proven match-winners for their team. But the hosts looked lethal in the ending stages.. The Day Four morning will come with a lot of importance for both teams. If Misbah-Shafiq combination manages to survive Gabriel, ALzarri Joseph and Jason Holder, the inexperienced West Indies squad may just feel the pressure.

Pakistan need Misbah and Shafiq to bat the maximum they can because this is the last batting pair they have at their service. Next to follow are Sarfraz Ahmed, Yasir Shah, Mohammad Aamer, Wahab Riaz and debutant Mohammad Abbas. Pakistan can t actually hope their tail to emulate West Indies here and hence this batting pair has a lot of responsibility riding on their shoulders. Aamer’s best bowling figures, Younis’ 10,000 runs and other highlights

Misbah is the man who is known for carrying immense responsibility on his shoulders but with the West Indies bowler s surprising every now and then with their bowling variations, things won t be easy for the visitors. They will have to ensure of scoring at least 50-60 runs in the first session without losing any wicket. If Pakistan manage to do so, they will probably dominate the second session too. Or to be precise, Misbah and Shafiq will have to do what Younis and Babar did on Day Three.

For West Indies, the equation is simple. They need to get wickets in the first hour of Day Four. The more Pakistan wickets they end up taking in the first session, the more dominance they will earn on this series opener. The wicket of Misbah might just turn the game in their favour pretty quickly as he is the lynchpin in this lower-order Pakistan batting.

Their bowlers were tired on the Day Three as the day progressed. But despite the defying knocks from Younis and Babar, the hosts displayed great determination getting wickets at crucial juncture of the game. Moreover, Holder has been a shrewd captain and he deployed his bowlers well, varying the bowlers on regular basis. 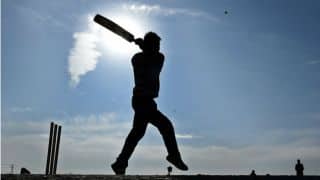