West Indies are at 244 for 6 at the end of Day 2 against Pakistan in the 3rd Test at Sharjah.

Pakistan bowlers displayed a stellar show on Day Two of the third and final Test against West Indies at Sharjah. However, Pakistan were 255 for 8 at the end of Day One. The track, for the matter, was tailor-made for the batsmen. “The wickets won t come easier and the bowlers will have a tough time,” Misbah-ul-Haq said at the toss. Not that Misbah was wrong but his team failed to bat well as a cohesive unit. Opener Azhar Ali, who scored a triple-century this series, was dismissed in the very first over, followed by one-down Asad Shafiq. LIVE CRICKET SCORECARD: Pakistan vs West Indies, 2nd Test at Abu Dhabi

Shannon Gabriel extracted extra bounce and movement and put Pakistan on the back foot with twin strikes. Well begun is half done, they say. West Indies started off the proceeding on a blistering note. Few more wickets and they knew Pakistan were out of the game. But, as fate may have it, Pakistan had the stalwart Younis Khan and youngster Sami Aslam in the middle. The duo added 106 for the third wicket and set a solid foundation for the middle order. Younis, for that matter, scored his 31st half-century, playing just another gem of a innings. In fact, the staggering batsman has more centuries (34) than half-centuries.

All the same, the duo were sent back to pavilion before they reached the three-figure mark, putting West Indies back in the driver’s sea.

In came captain Misbah and Sarfraz Khan. The pair stitched up an 80-run partnership for the fifth wicket. Again, the duo failed to continue the momentum and were dismissed in quick succession. Eventually, they were bowled out for 281.

For West Indies, Gabriel’s figures read 3 for 67, and Devendra Bishoo took a stunning five-wicket haul to restrict Pakistan to a moderate total on a belter of a track.

Pakistan bowlers went all guns blazing and dismantled West Indies’ top order, reducing them to 68 for 4. It was a collective bowling effort, for all 4 wickets were taken by four different bowlers.

However, Kraigg Brathwaite and Roston Chase provided the much-needed impetus, adding 83 for the fifth wicket, before Chase was dismissed by Mohammad Amir. On the other hand, Brathwaite displayed tenacity, putting a price on his wicket. Meanwhile, wicketkeeper-batsman Shane Dowrich played a critical innings of 47.

At close skipper Jason Holder was unbeaten on 6 as West Indies were 244 for 6, just 37 runs away from Pakistan’s first innings total of 281. This gives West Indies a good position for the first time in the series against Pakistan who are targeting a 3-0 clean sweep after winning the first Test by 56 runs in Dubai and the second by 133 runs in Abu Dhabi. Brathwaite batted solidly as he negotiated Pakistan’s spin-cum-pace attack with full confidence, having so far hit ten boundaries. “There will be no butterflies,” said the 23-year-old from Barbados.

“For me helping the West Indies to a good lead will be more important and I will do my best to achieve that.” 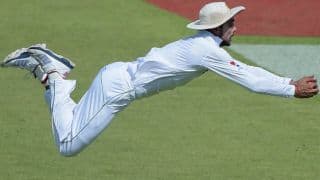