Pakistan step into the first Test of the three-match Test series against West Indians on a rather emotional note as their veterans Misbah-ul-Haq and Younis Khan will be playing their final Test series. Pakistan, who have not won a Test series in West Indies yet, have the opportunity to make this count, aiming to take the first lead at Kingston. The live cricket streaming of the match will be available in India on Sony LIV, while the live telecast will be available on Ten 1 HD and Ten 3 in India and Pakistan. As for West Indies, the game would offer their young guns an opportunity to transform their fortunes in the longest format. Full Cricket Scorecard: Pakistan vs West Indies 1st Test at Sabina Park

Misbah and Younis, who are just a few runs away from personal landmarks of 5,000 and 10,000 Test runs, will look to bring their combined experience in the forefront and lift Pakistan from the No. 5 ICC Test rankings. In the three-match Test series last year at UAE, Pakistan were victorious 2-1, following which they had a bumpy road in Test series against New Zealand and Australia respectively. Meanwhile, on the occasion of Sabina Park s 50th Test, West Indies would want to bring a victory home. With the mixed performance in the warm-up match, both teams had some positives to take away.

Pakistan s bowling unit was on top while West Indies debutants Vishaul Singh and Shimron Hetmyer were notable players who made complete usage of the opportunity. Apart from these debutants, Kieran Powell also showed during the practice match why he is one of West Indies brightest prospects. Playing his last Test in 2014, Powell will aim to seal his spot permanently in West Indies XI.

Keeping personal milestones aside for the respective sides, both teams will hope to better their records in Tests after the recent slumps. 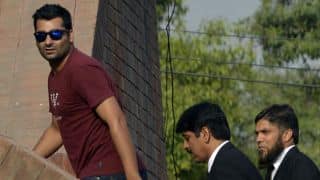