Pakistan s win at Guyana over West Indies on Sunday has set the stage for a thrilling final to decide who shall reign supreme.

Following a commendable 74-run win in the second One-Day International (ODI), Pakistan have managed to keep the three-match series alive against West Indies. Pakistan s win at Guyana on Sunday has set the stage for a thrilling final to decide who shall reign supreme. The series is currently levelled at 1-1 with both Pakistan and West Indies registering impressive victories. Pakistan suffered a setback early on in the series when West Indies clinched a come-from-behind victory by 4 wickets. However, Pakistan left no stones unturned to ensure they stay alive in the series, winning the next ODI by 74 runs despite a spirited fightback from Jason Holder and co. FULL CRICKET SCORECARD: Pakistan vs West Indies 2017, 3rd ODI at Guyana

In the second game, Babar Azam scored his 5th ODI hundred 4th against West Indies and finished on 125. He was supported by Imad Wasim, who struck an unbeaten 43 to allow Pakistan to finish at 282 for 5 in 50 overs. Hasan Ali claimed a 5-wicket haul to rattle the batting line-up of the hosts. On a batting-friendly wicket at the Providence Stadium, West Indies could manage a mere 5 wickets. Shannon Gabriel claimed 2 for 50. West Indies were meek in reply, as it was just a couple of batsmen Holder and Ashley Nurse who could provide some resistance. Holder fought hard right up till the end, and was the last man to fall to be dismissed for 68. Nurse, who was one of the heroes in West Indies historic win in the first game, also tried to provide some late fight back, but could not pull if off this time and fell for 44.

Heading into the final game, Pakistan s top-order batting is likely to remain the same, with Ahmed Shehzad and Kamran Akmal opening the innings, followed by Azam at No. 3. Although Shehzad failed to fire in the last tie, he was in a fine touch during the opening ODI, and will be expected to fire in the final match. The middle-order will comprise of Mohammad Hafeez, who has been in decent touch with both bat and the ball, followed by veteran Shoaib Malik, who too was among runs in the first ODI. Imad Wasim too should retain his position. Babar Azam vs Ashley Nurse and other key battles

Junaid Khan could face the axe, following his expensive and wicket-less spell in the second ODI, and could make way back for Wahab Riaz. However, the most notable thing in the previous game was Pakistani spinners generating prodigious turn. Therefore, this could well prompt Sarfraz Ahmed to go for an extra spinner, which means Mohammad Ashgar can come in for Junaid Khan. Adding another spinner in the mix will tempt Pakistan, after witnessing West Indies troubles against Shadab Khan s sharp bowling in the last game.

For the West Indies, the top-order could witness a change. Among the openers, Evin Lewis retains his spot, while Chadwick Walton could face axe following his poor performance in both the ties. He could make way for Rovman Powell. Kieran Powell too retains his place in the playing XI; he scored a fifty in the first game. Shai Hope has to be in the XI, followed by Jason Mohammed, who was the match-winner during the first ODI. PAK vs WI 2017, 2nd ODI at Guyana: Azam’s 125, Hasan’s 5-38 and other highlights

Jonathan Carter has been struggling with both bat and the ball, and could be removed from the equation, making way for Miguel Cummins. Holder would not mind adding another pacer will add more to his team s firepower. The pitch has assisted bowlers in the series so far. In the bowling attack, a change is highly unlikely with Ashley Nurse, Devendra Bishoo, Alzarri Joseph and Shannon Gabriel retaining their spots.

With the game once again being held in Guyana, the wicket is expected to carry something for both batsmen and bowlers, as seen in the two games before. West Indies do hold a 3-2 advantage over Pakistan at the ground, but their record will be under pressure with Pakistan finding their mojo back. 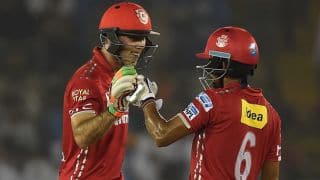