With West Indies repeating their mistakes in every encounter, the second ODI may also go in Pakistan s favour.

Pakistan and West Indies meet for the second of the five One-Day International (ODI) series with Pakistan leading 1-0. West Indies have an uptill task in hand as nothing has clicked for them in this tour so far. After losing the Twenty20 (T20I) series 0-3, West Indies will like to get back in a format where they are ranked No. 8 in ICC ODI Rankings, yet one place ahead of Pakistan lying at No. 9. The second match will be played at Sharjah Cricket Association Stadium, Sharjah. Pakistan will like to consolidate on their lead in the series while West Indies will seriously need to step up. Full Cricket Scorecard, Pakistan vs West Indies, 2nd ODI, Sharjah

Talking about the first ODI, West Indies won the toss and elected to bowl. They had Pakistan in a spot of bother as Pakistan lost Azhar Ali early. Pakistan s captain could not even open his account which brought Man of the Match, Babar Azam in the middle. Azam struck an 82-run stand with Sharjeel Khan before Sharjeel departed for 54. Azam did not get bothered by losing partners in quick succession, as Shoaib Malik came in next and scored 9, and handled the Pakistani batting single handedly. Azam anchored the innings well and attacked with minimal risk.

Pakistan have always been in search of a player like Azam who can steady their innings and bat for long. Azam applied himself well in the crease and took every bowler on their merit. Pakistan s T20I skipper and wicketkeeper-batsman, Sarfraz Ahmed added 35 off 45 balls with Mohammad Nawaz and Imad Wasim getting starts. Carlos Brathwaite took three wickets whereas Shannon Gabriel, Jason Holder, Sunil Narine and Sulieman Benn got a wicket each. However, they could not apply the brakes on Pakistan s batting with regular wickets. Pakistan scored 284 for 9 in 49 overs, as bad lights stopped play for an interim period.

After the delay and innings break, West Indies came out to bat. Just like in the T20Is, no West Indian batsmen got going as they kept losing wickets from one end to beg back their innings. Johnson Charles, Kraigg Brathwaite, Darren Bravo and Brathwaite got starts but could not produce anything significant for their side. West Indies lost half their side before getting into three figures and were struggling at 135 for 8 before succumbing to 175 all out.

No one apart from Marlon Samuels stood for them. That said, even Samuels could not get a fifty as his 46 remained the highest score for West Indies. Wasim, Mohammad Aamer and Wahab Riaz took a wicket apiece but it was Nawaz s four-wicket haul along with Hasan Ali s three scalps pushed West Indies to the back foot.

West Indies will have to find a way to survive in the ODI series as they are a weak side when it comes to the longer format. They will play three-Test series before summing up the tour so the ODI series is their best chance. Their bowlers also have to maintain pressure for long period rather than confining it to small phases. In the end, Holder has a big role to play if West Indies want to save themselves from further humiliation. Holder does not look like a thinker and needs to find answers himself for his side s lackluster performance in every outing.

Coming to Pakistan, they will be rejoicing with their sudden turnaround in limited-overs as they have faced sufficient defeats in coloured clothing recently. They won the T20Is without dropping a single game. The first ODI also showed that they mean business and have started their revival process in both formats. Their batting as well as bowling have improved. It has been noticed that Pakistan either imposed pressure with the bat or ball but not in both departments simultaneously. However, they have performed better than expected so far in this home series.

Pakistan are at the No. 9 position in ODI rankings and will have to mend things quickly and this series can start their process of climbing up the ladder. Azam, Nawaz, Hasan and Wasim have been their young stars and they will like to give them full freedom to express themselves on the field and win them this series without sweating much.

Both the teams are almost equal on paper but West Indies lack common sense at the moment. Their team management and leadership are under heavy scanner and will have to perform or perish further. With West Indies repeating their mistakes in every encounter, the second ODI may also go in Pakistan s favour. Nonetheless, cricket is a funny game and West Indies may show them that they have not given up yet and can bounce back. 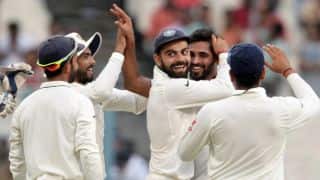