West Indies are well ahead in the race in the third and final Test at Sharjah, as Pakistan lead by 31 runs with 6 wickets in hand at the end of Day Three.

West Indies are well ahead in the race in the third and final Test at Sharjah, as Pakistan lead by 31 runs with 6 wickets in hand at the end of Day Three. Leading the series 2-0, Pakistan’s main aim was to whitewash the visitors. All the same, West Indies left no stone unturned to dominate Pakistan in their own den. After taking a 56-run lead in the first innings, West Indies captain rocked the Pakistan top order and scalped 3 wickets, dismissing Sami Aslam, Asad Shafiq and Younis Khan. To make matters worse, captain Misbah-ul-Haq played a rash shot, holing out a short delivery to deep square-leg. LIVE CRICKET SCORECARD: Pakistan vs West Indies, 2nd Test at Abu Dhabi

The scorecard read 48 for 4, still trailing 8 runs. All the same, Azhar, the triple-centurion, was still at the crease. And at the other end was Sarfraz Ahmed, player armed with extreme patience. The duo added 39 runs for the fifth wicket, steadying Pakistan’s sinking ship. All the same, Kraigg Brathwaite became the fifth West Indian batsman to carry his bat with an unbeaten hundred before Jason Holder. Brathwaite held West Indies’s first innings of 337 with a resolute 142 not out.

At close Pakistan were struggling at 87 for 4 with opener Azhar Ali 45 not out and Sarfraz Ahmed 19 not out, leading only by 31 runs with six wickets intact and two days to play. Pakistan needed a big effort after conceding a 56-run lead but from 37 for 0 they lost four wickets in the space of 11 runs with Holder firing on all cylinders and their batsmen playing rash shots.

An over later Holder had Younis Khan caught behind for zero and from the other end Misbah-ul-Haq holed out off spinner Roston Chase for four. West Indian paceman Shannon Gabriel had Ahmed caught in the slip for 9 only to see the umpire calling a no-ball, allowing the stand to reach 39 by close.

If West Indies pull off a win, it will be their first in 13 Tests since beating England at home in May last year, while Pakistan will spoil a good chance of a 3-0 whitewash after winning the first two Tests in Dubai and Abu Dhabi.

The highlight of the morning session was Brathwaite’s knock. He held the innings with 11 boundaries and for the first time in the series lifted West Indies into a rare lead. Brathwaite added an invaluable 60 runs for the 8th wicket with Devendra Bishoo who made a solid 27 to leave Pakistan spin-cum pace attack frustrated.

In the end, it was left to the lively pace of Wahab Riaz to take the final three wickets for his second five-wicket haul in Tests, finishing with 5 for 88 in 26.4 overs of hard work. Riaz, whose first five-wicket haul came in his debut Test against England at The Oval in 2010, had Bishoo caught behind before dismissing Alzarri Joseph and Shannon Gabriel to warp up the innings.

Pace partner Mohammad Aamer took 3 for 71 while the spinners Yasir Shah and Zulfiqar Babar took a wicket apiece. Brathwaite had a lucky escape when wicketkeeper Ahmed failed to hold a sharp, rising edge off spinner Mohammad Nawaz when he was on 121.

In the same over, Bishoo was given out off a sweep shot, but he successfully reviewed English umpire Michael Gough’s decision as the ball had hit fielder Ali’s helmet before he took the catch. Resuming at 244 for 6, the West Indies were looking for a good lead.

Brathwaite hit Aamer for his 11th boundary off the day’s first ball, and then on-drove him towards mid-wicket for two to reach his hundred off 211 balls. Pakistan took the second new ball with the total on 251 and Aamer struck instantly, clean-bowling Holder with a sharp incoming delivery for 16. 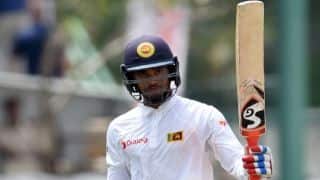 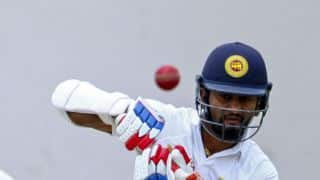