Pakistan are well placed at 530/3 at the end of second session on Day 2.

Pakistan continued to pile massive runs in the second session of Day 2 of the first Test against West Indies at UAE on Friday. Azhar Ali remained unbeaten on 272 and scripted history with some flawless style of play and exquisite technique. Pakistan have crossed the 500-runs mark and find themselves in a laudable position at the end of second session on Day 2. West Indies bowlers have had a tough time in confronting the Pakistan batsmen as they were running out of options quickly and didn’t have any idea whatsoever. Pakistan have batted beautifully and their intentions are pretty much clear of winning the game. FULL CRICKET SCORECARD: Pakistan vs West Indies, 1st Test match

The second session of the game was once again dominated by the hosts as they kept scoring runs at a brisk rate. West Indies bowlers were struggling to get their length right and have looked bereft of oomph. Azhar Ali looks determined in the middle and played with sheer mettle. He played his shots and milked runs out of flat UAE wicket. He can well go on to score his maiden triple ton as he looks all set and has the temperament to do so. With the pitch not doing anything for the bowlers, one can expect Pakistan to add some more runs to their existing total and declare by the end of the day.

West Indies bowlers didn’t show any resistance and failed to trouble the Pakistani batsmen as they scored with ease. The second session started with some action as Azhar smashed couple of boundaries to Gabriel, and with the second one he also became the first player to have smashed a double ton in Day-Night Test. It’s a huge achievement for him as he achieved a new landmark and engraved his name in the history of cricket. In the same over, Pakistan also reached the 400-runs mark in their 400th Test appearance. Azam and Azhar continued to get the scoreboard ticking and took no risk whatsoever.

Azhar kept punishing the loose deliveries and offered a stroke whenever the ball was there to be hit. West Indies bowlers didn’t have any game plan to bring him down. Gabriel bowled many massive no-balls, which was not helping their cause in any manner. The bowlers were not backed well y the fielders as they leaked runs on the field. The bowlers were already having a tough time in putting the hard yards and their fielders let them down too.

When Azhar drove one off Holder, he recorded his finest performance in Test cricket with 227 runs to his name. In the very same over, West Indies once again lost a review after a yorker from Holder struck Azhar’s pad but the replay persisted with umpire’s decision. Moments later, Azhar also brought up his 250 in style as he smashed a beautiful six to reach the milestone. In no time, Pakistan also brought up their 500, which was engineered by Azhar Ali.

Azam looked good and was batting comfortable on 69 when Bishoo outfoxed him. Azam gave a simple catch to Holder at covers. Misbah-ul-Haq walked out to the middle and showed his aggressive intent right from ball one as he reverse-swept the ball for a boundary. The was some kind of confusion on the very last delivery before the end of second succession but West Indies couldn’t effect a run out and anther half-chance was put down. Their fielding has been a huge drawback, which has also let their bowlers down. A bowler puts lots of hard work and such dismal fielding hampers their confidence and morale.

Another interesting aspect about the stands being empty in the UAE despite it being a holiday in The Gulf is not motivating at all. Test cricket is being played in Day-Night format to attract enormous crowd and enrich the oldest and longest format of the game. It has not drawn enough attention in the recent times with the emergence of T20s. There were hardly any fan or crowd spotted in the entire stands during the session but one can expect people to come in as Azhar is on a spree. Hopefully, the ending days of the Test attracts more people and the purpose of the crowd the game is filled. 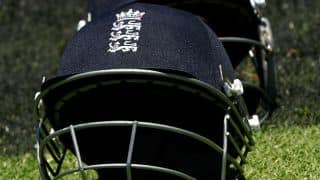