Marlon Samuels, Darren Bravo remained unbeaten on 50 and 30 respectively at Tea on Day 3.

West Indies have come out fighting in the first session of Day 3 and weathered the early storm in the first Test against Pakistan in UAE. West Indies were well placed at 138 for the loss of two wickets with Darren Bravo and Marlon Samuels still alive at the crease. It has been a wonderful display of resistive batting by the duo as they have not early stayed alive at the crease but also scored runs. Samuels innings’ was a delight to watch as he played an impactful innings and counterattacked the Pakistani bowlers. West Indies still have a long way to go with a trail of 441 runs and eight wickets in hand. They have some serious depth in their batting and if these two built a solid platform one can expect West Indies to reach closer to Pakistan’s score. FULL CRICKET SCORECARD: Pakistan vs West Indies, 1st Test match

West Indies started the proceedings with their overnight score of 69 for the loss of one wicket with Kraigg Brathwaite and Darren Bravo at the crease. Yasir Shah bowled beautifully to get rid of Brathwaite in his very first over of the day. He tosses it up and draws the batsman forward as the ball passes its bat and kisses the off-stump. West Indies suffered an early casualty without adding any run to their overnight score. It was a beauty of a delivery to get rid of Brathwaite, which made way for Marlon Samuels out in the middle. With this scalp, Yasir moved on to his 97th Test wicket and a step closer to script history.

Samuels showed his aggressive intent by smashing couple of boundaries to Yasir and taking the attack to the opposition. Samuels brought his experience into play and confronted Yasir with immense confidence. He played with soft hands, got to the pitch of the ball and also attacked him, which didn’t let him settle despite there being enough turn. Bravo was defensive and rightly so as his team needs them to stay as long as possible out there in the middle. The pitch has been flat with some turn in it and if these two continue to bat a result will be highly unlikely.

The duo showed enough resistance and did well in not losing a further wicket. Yasir Shah bowled well and got the ball to turn but the duo played him cautiously. There were few hiccups but West Indies didn’t pay for it as Pakistani fielders were not up to the mark. They dropped Samuels dropped in the 29th over at slips as he edged one but was lucky enough to get a reprieve. Bravo too got a chance as he a thick edge was not cupped at first slip off Yasir. The fielding has let them down after which the West Indies batsmen didn’t provide any room for error.

Marlon Samuels looked tentative initially but inspired confidence once he was set. He took on Yasir Shah and started playing his strokes with guile. He smashed couple of boundaries in the same over and drove as soon as the ball was pitched up. Bravo remained silent for sometime while Samuels was scoring runs from the other end. It has been a silent session so far with some action from Samuels’ willow. This partnership has fared well so far and looks threatening with two key players battling it out for West Indies. Samuels didn’t enjoy a fruitful run in the recent times and this is an ideal platform for him to make his chances count and score big. He has got off to a good start and should convert it into a big score. Samuels has offered shot to every loose delivery and defended the good ones. Bravo has placed his innings sensibly and will look to make it big.

The crowd again disappoints as not enough people have tuned up for the Day-Night encounter. Not many would have thought that West Indies would be able to fight back. As the ball is old, one can expect some reverse swing to come into play and the likes of Mohamad Amir and Sohail Khan to make the most of it. 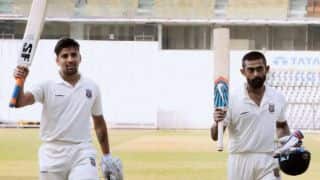