With the three days still left, this Test seems to be in Pakistan's favour but West Indies can still comeback like the did in the first Test.

West Indies ended Day Two of the second Test versus Pakistan reeling at 106 for the loss of 4 wickets. The visitors are 346 runs behind the hosts’ total of 452 from the first innings. Riding on Younis Khan’s 33rd century, Pakistan started the day with expectations of their Test skipper, Misbah-ul-Haq, getting to another ton but he got out for 96. However, Pakistan managed to cross the 450-run mark courtesy a fine fifty by wicketkeeper-batsman, Sarfraz Ahmed. Shannon Gabriel’s five-for could not stop Pakistan from scoring 400 and West Indies will have to bat well to get close to their score. The live telecast and live streaming of the match will be available on tensports.com and Ten HD 1, Ten 1. With the three days still left, this Test seems to be in Pakistan’s favour but West Indies can still comeback like the did in the first Test. Live Cricket Scorecard: Pakistan vs West Indies 2nd Test at Abu Dhabi

Second day’s play started with Pakistan at 304 for the loss of four wickets. Misbah, who was on unbeaten 90 along with nightwatchman Yasir Shah. It was very much expected that Misbah would get to his 11th Test century as he had looked composed in the middle but was unlucky on missing out on the landmark, falling short by four runs. Yasir played a brilliant cameo as he was seen playing both defensive and attacking shots with perfection. After the duo got dismissed, Sarfraz, along with all-rounder, Mohammad Nawaz and Sohail Khan’s handy knocks helped Pakistan cross the 450-run mark despite Gabriel shining from his end. West Indies came onto bat with in-form player, Darren Bravo, taking strides with Leon Johnson. Yasir and Rahat Ali provided the breakthroughs but it was two quick wickets in the dying moments of the day which pushed West Indies on the mat.

West Indies lost their openers after vital starts but Marlon Samuels and Kraigg Brathwaie steadied their ship before perishing cheaply in the fag end of the day. Devendra Bishoo and Jermaine Blackwood are at the crease for the struggling side. West Indies still have a big task in hand as they are trailing by 346 runs. 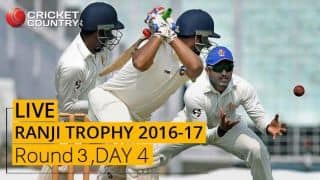