Pakistan are ahead by as many as 510 runs in their first innings, after amassing 579 for 3 declared on one of the flattest decks seen recently.

Pakistan are ahead by as many as 510 runs in their first innings, after amassing 579 for 3 declared on one of the flattest decks seen recently, against a toothless attack. The live cricket streaming of Day Three between Pakistan and West Indies will be essential for those who are interested to see the hosts taking further strides in international cricket, as they have placed themselves in a position from where they will only dominate. LIVE CRICKET UPDATES: Pakistan vs West Indies, 1st Test at Dubai, Day 3

The live cricket streaming of the Pakistan vs West Indies match has certainly been a boon for all those who wanted to watch the 400th Test for the Pakistani cricket team. The occasion has been celebrated in a spectacular way by Azhar Ali, as the right-handed batsman became the only fourth Pakistani in their cricket history to make a triple century. Thanks to the innings of 302 not out by Azhar, Pakistan were able to post a massive total in their first innings.

It has been a sad story for West Indies as well as cricket in general, since a handful of spectators have turned up so far on Day One and Day Two of this opening Test between Pakistan and West Indies. Pakistan, who are playing the hosts, too have longed for support so far in the Test. 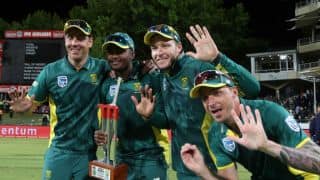 South Africa become No. 2 in ODI rankings after demolishing Australia