India-Pakistan cricketing ties have taken a major hit since the 2008 Mumbai attacks.

The first One-Day International (ODI) between Pakistan and Zimbabwe witnessed another good turnout at the Gaddafi Stadium in Lahore, as Pakistan beat the visitors by 41 runs to extend Zimbabwe’s unbeaten run in their tour so far. One of the key moments in the match however, was a banner in the crowd that read the words “We miss you India”. READ: Pakistan defeat Zimbabwe by 41 runs in 1st ODI

India and Pakistan, who have had political tensions flare up between them every now and then, have had strained relations as far as cricket is concerned. The two sides did not play Test cricket for 10 years between 1989 and 1999, while the 2008 Mumbai attacks caused the Board of Control for Cricket in India (BCCI) to sever all its ties with the Pakistan Cricket Board (PCB). Currently, there are talks going on between the two boards over the revival of cricketing ties between the two nations, with PCB chief Shahryar Khan visiting India for the same. READ: Shahryar Khan proposes Pakistan home matches in India

Meanwhile, Pakistan took a 1-0 lead in the three-match ODI series with the 41-run win. Shoaib Malik was awarded the ‘Man of the Match’ for his 76-ball knock of 112, which included 12 fours and two sixes. Haris Sohail (89 not out), Mohammad Hafeez (86) and captain Azhar Ali (79) chipped in with vital contributions, as Pakistan finished on 375 for three.

Zimbabwe lost early wickets during their chase, by skipper Elton Chigumbura (117) and Hamilton Masakadza (73) gave the visitors some hope with a 124-run stand for the second wicket. Chigumbura’s dismissal however, brought an end to the Zimbabwean hopes as they eventually finished on 334 for five, their highest total against a Test-playing nation. 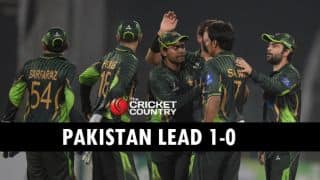 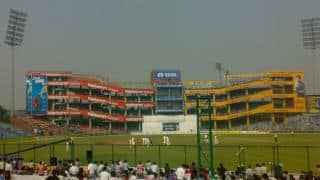