Pakistan recently got the green signal from their government to tour India for the ICC World T20 2016.

Lahore: The Pakistan Cricket Board (PCB) on Thursday threatened to pull out of the forthcoming ICC World Twenty20 2016, if they are not guaranteed foolproof security and a “public statement” about its participation in the mega-event by the Indian government. Even as uncertainty refused to die down over the fate of the high-profile match – scheduled to be held in Dharamsala on March 19 — with Himachal Pradesh’s ex-servicemen league protesting against hosting the game, PCB chairman Shaharyar Khan called for India to publicly acknowledge Pakistan’s participation in the tournament. “We have told the ICC that there is only one step that the Indian government needs to take and that is to issue a public statement that they are ready to welcome Pakistan and ensure full security for our team, which hasn’t come as yet,” Shaharyar said. READ: India vs Pakistan, ICC World T20 2016: Terrorism and cricket cannot go together, says Vijai Singh Mantokia

“We have already been given permission [to travel] and we want to come, but we need reassurance and they should give a statement that will create a sense of security among us. I spoke to the BCCI and they are giving us a private assurance, claiming that it’s all about internal politics, nothing else, and that Pakistan should come. READ: India vs Pakistan ICC World T20 2016 match to be played at Dharamsala: Anurag Thakur

“But a public statement is important and it should come, as there are threats and we can see them. We have written to the ICC that they should come forward and we’ve asked the Indian government to assure us and give a statement. If they won’t give the statement, then I see it’s very difficult to go to India. There is no deadline in making the decision but we will have to monitor till the end and can even pull out at the eleventh hour.”

Referring to the match, ex-servicemen league’s state chief Maj Vijay Singh Mankotia said that the “matter is non-negotiable”, a day after Himachal Pradesh Chief Minister Virbhadra Singh advised BCCI secretary Anurag Thakur to sort out the issue of holding the game with families of martyrs and ex-servicemen who lost their lives in the Pathankot airbase terror attack in January. READ: Shahid Afridi will remain Pakistan captain until the end of ICC World T20 2016, says Shahryar Khan

“We have concerns and the threats are Pakistan-specific. Even now, the Himachal Pradesh chief minister has also said that they will not guarantee the security,” Shaharyar said during a press conference at the Gaddafi Stadium here.

“We have been informing the ICC on a daily basis about these threats which is not encouraging for us.” The PCB has been keeping a tab on the developments in the northern state.

Shaharyar said, “Although our government has already given permission, these latest threats need to be taken seriously. Political parties like Shiv Sena [threatened us], now even the Congress has also said they will not let us play along with some other groups. Those are the ones creating agitation.” 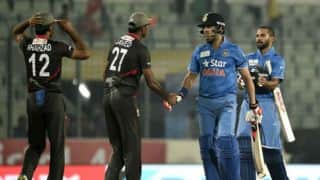