England and Pakistan meet in the final encounter of Group B of ICC Women’s World T20 2016 at Chennai on Sunday. The match is set to be played at Chennai’s Chepauk. Both the sides, England and Pakistan will be led by their regular Twenty20 International (T20I) skippers, Charlotte Edwards and Sana Mir respectively. If England win, they easily go through to the knockout stage. However, if Pakistan end in on the winning side, the two sides out of England, Pakistan and West Indies—with a better run rate will qualify for the semi-final. While England and West Indies have six points each after three matches, Pakistan have four. LIVE CRICKET SCORECARD: England Women v Pakistan Women, Super 10 Group B, Match 19 at Chennai

Pakistan would look to capitalise on the pitch conditions with support from their fast bowlers with likes of Iram Javed, Sidra Ameen, Asmavia Iqbal by their side. England has been impressive in every World Cup reaching the finals and winning the inaugural T20 World Cup in 2009. They are tough contenders for the World Cup. Skipper Charlotte Edwards, Lydia Greenway and Danielle are the players to watch out for England’s batting order.

England are coming off a superb win against India Women, with the latter getting knocked out after they lost a nail-bitter to West Indies Women earlier in the day. England defeated India by 2 wickets in an edge-of-the seat thriller at the spectacular Dharamsala a couple of days back. It was cracker of a contest as both teams refused to give up even in crunch situations. It was India’s second consecutive loss by a small margin, making their chances of qualifying for the semi-finals bleak. 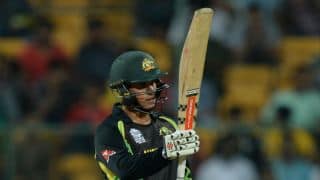