Karachi: Pakistani cricket fans are finding it difficult to get hold of tickets for the three match One-day International (ODI) series against Zimbabwe, which begins from Tuesday at the Gaddafi stadium in Lahore.

After the two sell out Twenty20 International (T20I) matches at the weekend, fans have been complaining about shortage of tickets for the ODIs, although the Pakistan Cricket Board (PCB) had announced that the tickets are available at outlets of a well-known bakery franchise. Preview: Pakistan vs Zimbabwe, 1st ODI at Lahore

“We are trying to find out whether there is a shortage of tickets and why,” a board official said.

Just last week the PCB had filed a FIR against an office employee after around 600 tickets, each of which were priced at PKR 1,500, were stolen from the board offices. READ: Misbah-ul-Haq describes crowd enthusiasm during Pakistan-Zimbabwe T20I series “unparalleled”

Pakistani fans have responded enthusiastically to the first international series in Pakistan in six-years time. Television channels however, have shown cricket fans complaining about not getting tickets at the prescribed outlets.

The three ODIs that are due to be held at the Gaddafi stadium this week are significant for Pakistan since they have to win all three matches to retain their ranking points in the ICC table. The team rankings have become important after the ICC announced that the top eight teams on 31st September 2015 will qualify for the Champions Trophy to be held in 2017. READ: Afridi hopes Zimbabwe’s decision spurs more teams to tour Pakistan

Chief selector, Haroon Rasheed admitted that the Zimbabwe series and Pakistan’s tour to Sri Lanka in June-July, where they play five ODIs, are important for the team.

“There appears to be no second chance for us but at same time we are also trying to give chances to all those players who have done well in domestic cricket and about whom critics say they have not been treated fairly,” Rasheed a former Test batsman said. 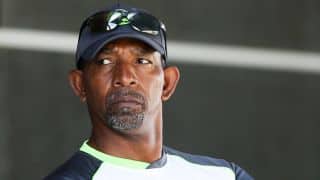