Pakistan opener Nasir Jamshed has been handed a one-year ban by Pakistan Cricket Board (PCB) relating to the Pakistan Super League (PSL) spot-fixing case. Jamshed was charged for being the contact person between the cricketers and the bookies but has denied them all. However, he has neither failed to submit proper evidence nor has cooperated with the board-appointed investigators, which led to the ban. Apart from Jamshed, Sharjeel Khan and Khalid Latif have also been banned, for five years each. Also, Mohammad Irfan and Mohammad Nawaz have been banned and have served their period.

“The three-member tribunal banned Jamshed for one year for non-cooperation with the investigation. PCB has not levelled any fixing charges on Jamshed as yet as there is another investigation under way against him in (the) UK,” PCB’s legal advisor Taffazul Rizvi revealed on Monday, reported AFP.

Jamshed has represented Pakistan in two Tests, 48 ODIs and 18 T20Is.

Sharjeel has been charged with bowling dot balls deliberately and Latif for playing the middle-man between Shajeel and the bookies. Their case, as well as Jamshed’s, is pending for final verdict. 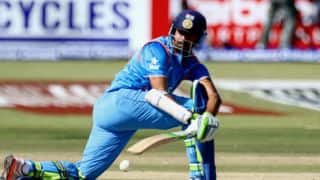