Pakistan became No.1 Test side after an impressive performance against England which resulted in a draw, 2-2

Cricket-obsessed Pakistanis were Tuesday celebrating their national team’s “incredible journey” to the top of the Test rankings after a turbulent seven years in which they were forced to play home matches on neutral venues. Pakistan supplanted arch-rivals India to become the world’s number one Test side on Monday, after India’s final Test against the West Indies ended in a rain-hit draw at Port of Spain. It capped a remarkable rise under captain Misbah-ul-Haq’s leadership for a team which was nearly thrown out of the international arena over a spot-fixing scandal on their tour of England in 2010. ALSO READ: Waqar Younis: Pakistan deserve to be No. 1 in Test cricket

Pakistan have also been forced to play their home matches in the United Arab Emirates since an armed attack on the Sri Lankan team bus in 2009, a significant disadvantage. Pakistan Cricket Board (PCB) chairman Shaharyar Khan branded the rise “historic”. “The ascension to the top of the ICC Test rankings culminates an incredible journey for Pakistan cricket,” he said. “This is a historic moment in our rich Test cricket history and the credit for this great achievement goes not only to this team but to all the players, coaches and support staff members who have represented Pakistan in recent years.” ALSO READ: English all-rounder David Willey to join ODI squad despite injury

New coach Mickey Arthur stressed that the work was just beginning. “It’s a fantastic achievement and a lot of people deserve the credit for that, but the top of them all will be the players who have worked hard and been outstanding,” said Arthur, who coached Pakistan to a 2-2 draw in the four-Test series against England. I am just the lucky coach who has been with the team now but others have done wonderfully well,” he added, singling out his predecessor Waqar Younis.

“People may say that its easier to get there than to remain there so we need to keep that momentum, and improve in one-dayers.” Under Younis, Pakistan plummeted to number nine in one-day international rankings — a slump which they need to address in the five-match series against England starting on Wednesday. Younis, who coached Pakistan in two stints from 2010-11 and 2014-16, was also delighted said it was a “proud moment”.

“The hard work has paid off… We as a nation are all proud of this achievement.” Misbah, who has led the side in 46 Tests since the spot-fixing scandal while keeping the off-field image clean, echoed the comments. “It’s the greatest moment of my career,” he told AFP, thanking “everyone involved in the game”. Fans on the street are also savouring the occasion. “We cannot bring international cricket (to the country) but we have brought the number one rankings. This has proved that we deserve cricket on our home grounds,” said Abdul Qayyum.

The ICC will present a special trophy to Pakistan in honour of the achievement next month. If Pakistan remain number one until the April 1, 2017 cut-off date, they will also receive a much-needed $1 million prize money. 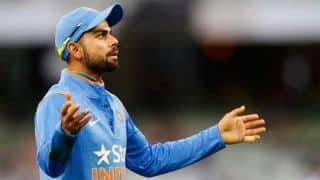