Hamstring injury could keep Pakistan captain Misbah-ul-Haq out of the third ODI.

Pakistan coach Waqar Younis Saturday admitted skipper Misbah-ul Haq remains doubtful for the third one-day international against New Zealand after he hurt his hamstring. Misbah fell awkwardly while chasing a shot in the third over of New Zealand’s innings during the second day-night international in Sharjah.

New Zealand won the match by four wickets to level the five-match series at 1-1. Pakistan won the first match by three wickets in Dubai on Monday. Waqar said Misbah remains doubtful for the third match, also in Sharjah on Sunday.  “Misbah has a hamstring issue and he will have a scan and then we will decide. He is not very good,” said Waqar.

Asked who would lead the team if Misbah is ruled out, Waqar said it would be up to Pakistan Cricket Board (PCB) chairman Shaharyar Khan to decide. “Look, captaincy’s issue is chairman’s domain and we will probably ring him if Misbah is not available to decide what we are going to do,” said Waqar. All-rounder Shahid Afridi is one likely choice.

Fast bowler Bilawal Bhatti was also ruled out of the third one-day after he injured his right hand during practice and needed stitches. Another fast bowler, Umar Gul, is also on the injury list after missing the second game due to a sore ankle. “It’s a long tour and there are bound to be injuries, we have lost Junaid (Khan) and we need to solve these injury issues before the World Cup next year,” said Waqar.

Waqar said he was still searching for a right bowling combination, badly affected by the suspension of ace spinner Saeed Ajmal and all-rounder Mohammad Hafeez due to illegal bowling action. “We are trying to build the right combination for the World Cup and these issues have not allowed us to do so,” said Waqar, who blamed a below par total for the defeat.

Pakistan will play New Zealand in the third One-Day International(ODI) of the series at Sharjah on December 14. 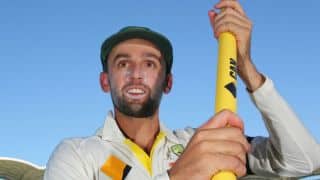 Nathan Lyon – From groundsman to star at Adelaide Oval