Shaw s score is the fifth-highest recorded score at any level of senior cricket in India.

The highest score remains with Dadabhoy Havewala, who had scored 515 for Bombay, Baroda and Central India Railways against St Xavier s College, Bombay, in the Times Shield final of 1933-34. However, no one else has reached 450 in senior cricket in India. The second-highest score was 443* by BB Nimbalkar, which also remains the only First-Class quadruple-century on Indian soil.

There have been 13 more recorded quadruple-hundreds in India, all at junior level; while some of them have come in school cricket, others have come at various levels of age-level cricket. The record, of course, remains with Pranav Dhanawade, who had famously slammed an unbeaten 1,009 for Shrimati Kantaben Chandulal Gandhi English School against Arya Gurukul Central Board of Secondary Education School at Kalyan earlier this year.

Barring Dhanawade and Havewala, Prithvi Shaw s 546 (in school cricket) remains the only quintuple-hundred in India. It must be mentioned here that Arman Jaffer, nephew of Wasim, is the only one to score two recorded 400s on Indian soil at any level.

As for the match, it petered out to a draw after Barisha SC batted on. By the time they declared with a 339-run lead, there was no time to bowl out DKS. Barisha got 4 points from the match and DKS 2. 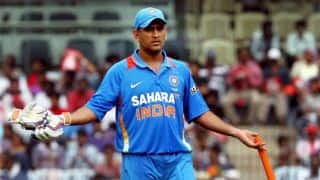 MS Dhoni may use coloured bat in IPL 2017