Gujarat skipper Parthiv Patel has led his team to the Super League stage of the Syed Mushtaq Ali Trophy 2015-16.

Mumbai:  Bidding to lead Gujarat to their second successive domestic T20 title, wicket keeper batsman Parthiv Patel has not lost focus on a re-entry into the national team, but without putting pressure on himself. “I am not someone who puts extra pressure on myself thinking that I have to play for India. Yes, there is dream and there is motivation of playing for India (again), but there’s no point (just) thinking about it,” said the 30-year old captain ahead of his team’s Super League engagement in the Syed Mushtaq Ali Tournament. FULL CRICKET SCORECARD: India vs Australia 2015-16, 2nd ODI at Brisbane

Gujarat are drawn in Group B with Delhi, Jharkhand and Uttar Pradesh and open their campaign tomorrow against Delhi at the Mumbai Cricket Association’s Bandra-Kurla ground. “I have been the top scorer so far in the tournament. I am feeling good about my game and if I can win this tournament for my state there is nothing like it. But definitely there is a big motivation of playing for India,” added the left-handed batsman who last played for India in a ODI against Sri Lanka in the tri-series at Brisbane, Australia in 2012. READ: Syed Mushtaq Ali Trophy 2015-16: Parthiv Patel’s sees Gujarat through 3-wicket win over Hyderabad

Patel, the youngest ‘keeper to play for India in a Test in 2002, lost that spot in 2008 after appearing for his 20th game. He recalled that he had played a few matches as a batsman instead of doubling up as a stumper. “I did play as a batsman for a while and getting consistent runs. As a player I can only perform to whatever ability I have. The rest is not in my hands. If I keep scoring and doing the right things. I am sure selection will take care of itself,” he added optimistically.

Patel said Gujarat relished the T20 format. “Obviously we do well in this format. We have won it twice in the last four years. This is a format in which we always do well. We go into this tournament with confidence. We just focus on our strength. Ours is a good mix of experience and young players who want to become big in Indian cricket,” he explained about his team’s strengths. 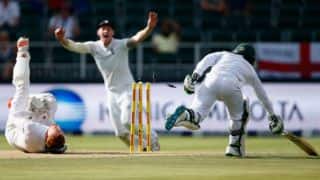