Rasool recently became the first cricketer from Kashmir Valley to get ODI cap.

Parvez Rasool said the upcoming India A’s tour of Australia is very important for him and would try to put in his best efforts to secure a place in the senior side.

“The Australia tour is very important for me. I am going to Australia with the A team and I hope to perform well and get a place in the Indian team very soon,” Rasool told reporters after inaugurating an Adidas showroom here.

Rasool, who recently became the first cricketer from Kashmir Valley to get the One-Day International (ODI) cap when he played against Bangladesh, said he always believes he has to perform well whenever a chance comes his way.

“Whenever I get a chance to play, I will put in my best and try to perform very well to represent the country in many tournaments,” he said.

He said it was an overwhelming feeling to get an ODI cap and a great experience to play for the country.

“When I played for my state in the Ranji [Trophy], it was a good feeling but when I got an ODI cap, the feeling was overwhelming. I felt really great to play an international match,” he said.

Rasool said he got huge support from the team management which encouraged him. Rasool said he has learnt many things from Sachin Tendulkar, who mentored the emerging players including him as part of an initiative by sports apparel giant Adidas.”Sachin paji gave us many tips. But one important thing which I learnt from him was to give respect to my cricketing equipment.

“He told us that after getting out, some batsmen throw their bats on the ground or hammer them on their pads, which is not a good thing. He said he has never done that because a batsman gets out due to his mistake and not because of his bat and we all should respect the equipment,” Rasool said. Shoaib Akhtar has done what Charlie Chaplin, Woody Allen and Dilip Kumar did earlier; and he has committed no crime! 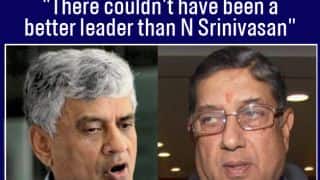