Chennai Super Kings (CSK) recovered from early blows to set a target of 183 for KXIP in the second semi-final of Champions League 2014. Dwayne Bravo was the top-scorer for the men in yellow jerseys, and scored a 39-ball 67.

Brendon McCullum and Dwyane Smith started things in style and got Chennai Super Kings to a steady start despite the KXIP bowlers keeping things tight and taking the pace off the ball. Parvinder Awana made the first breakthrough, and sent the dangerous Smith back to the pavilion.

Suresh Raina, who had inflicted unreal carnage on the KXIP bowlers came in to bat at No. 3, and looked extremely settled from the word go. However, shortly after his arrival, Brendon McCullum departed and Raina too hit one straight into the hands of George Bailey to give Parvinder Awana his third wicket. CSK were reeling at 41 for three at the close of power play overs.

Faf du Plessis and Dwayne Bravo then kept the scoreboard ticking, and their partnership would have been broken had Glenn Maxwell held on to a simple catch, to dismiss Bravo. The drop proved costly as Bravo went on to score many more runs.

Akshar Patel finally broke the partnership, in the 14th over, dismissing Faf du Plessis. Pawan Negi came in to join Bravo, and both batsman continued the scoring momentum and punished the KXIP bowlers getting them to 129 for four at the end of 15 overs.

CSK were looking set for a huge total, until Parvinder Awana took two consecutive wickets (Negi and MS Dhoni) in the 17th over to peg back CSK, and complete his hat-trick. Akshar Patel then sent Dwayne Bravo back to the pavilion, and as luck would have it, Glenn Maxwell took the catch. Ravindra Jadeja, then played a fine cameo of 27 from 13 balls to help CSK get to an imposing total of 182 for seven.

The total is well within KXIP’s reach and they’ll fancy themselves to join KKR in the finals, giving viewers a repeat of IPL 2014 final. 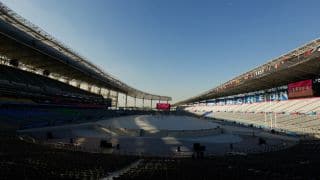 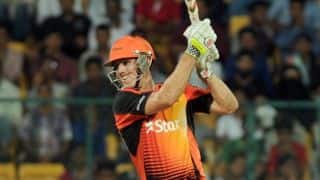 Mitchell Marsh out of T20I; unlikely for ODIs against Pakistan