Australian fast bowler Pat Cummins laughed off an incident captured on television which appeared to show him stopping the ball with the spikes of his shoes during the third Test against South Africa on Thursday. The incident happened shortly before tea at Newlands when Cummins was bowling to opener Dean Elgar but drew no action from the umpires, who inspected the ball and allowed play to continue with it. It was a mistake, said Cummins. I looked straight back and the umpire (Richard Illingworth) started to giggle. It was very unintentional.

#SAvAUS Pat Cummins could be in trouble here. Stands on the ball “accidentally on purpose” as @GraemeSmith49 points out pic.twitter.com/FDLa6joXG8

“Yes (they did check the ball), but obviously there were no issues, so he passed it on.” Cummins also admitted that he felt pretty ordinary in his first 10 overs. “Just felt like I wasn t probably hitting my length. But the ball starting swinging a little bit and the two batsmen batting really well. We spoke about just needing that opportunity where if we got one, we could get two or three pretty quickly.”

He also felt the wicket of AB de Villiers was crucial,”Fortunately, I bowled a nice half-volley and AB hit it to mid-off, and for me, it just felt like I had really good rhythm down that end. The ball was swinging pretty consistently, and I was happy.”

Cummins finished the first day with 4 for 64 as the home side reached 266 for eight at stumps. The ongoing series has been dogged by controversy with Australia’s David Warner and South African wicket-keeper Quinton de Kock squaring up in the first match.

Then, in the second Test at Port Elizabeth, Proteas fast bowler Kagiso Rabada was banned for shoulder-charging Australian skipper Steve Smith. Rabada appealed the decision and has been allowed to play at Cape Town. 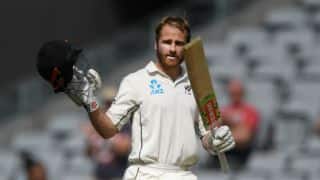 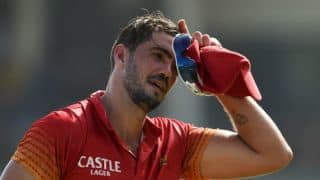