A year ago Pat Cummins was playing grade cricket. Now, at 18, he has emerged as Australia's next great fast bowling hope. After taking six for 79 in South Africa's second innings to give his team a chance of winning the second and final Test at the Wanderers Stadium. 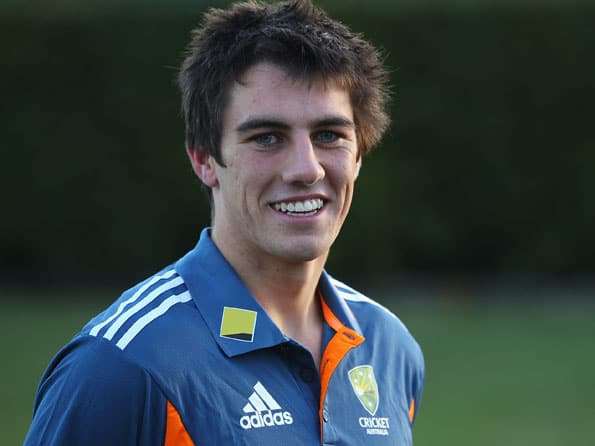 Pat Cummins, who played only three first-class matches for NSW before his Test debut, said playing with and against adults was nothing new for him Getty Images

A year ago Pat Cummins was playing grade cricket. Now, at 18, he has emerged as Australia’s next great fast bowling hope. After taking six for 79 in South Africa’s second innings to give his team a chance of winning the second and final Test at the Wanderers Stadium, Cummins admitted: “It’s surreal just to be overseas, playing cricket for Australia and to be in a position where we can win a game.”

It made Cummins the youngest bowler in Test history to take five or more wickets in an innings on his Test debut, but Cummins said age wasn’t a big factor. “I don’t feel much younger than the other guys,” he said.

“I’ve been here for a month and half, hanging around with the same bunch of guys and getting more familiar with them.”

Although he had played only three first-class matches for New South Wales before his Test debut he said playing with and against adults was nothing new. “I’ve been playing grade cricket for three or four years.”

Cummins also revealed plenty of maturity when he spoke about his approach to bowling in the Test match. Although capable of bowling at close to 150 kilometres an hour, he said he had cut down slightly on his pace on Sunday in order to take advantage of early morning conditions that favoured swing.

There was no holding back on Saturday, though, when in the words of team-mate Shane Watson he “worked over” Jacques Kallis, the fourth highest Test run scorer of all time. He sent down several vicious short balls to Kallis before having him caught at slip for two.

“Yeah, he’s obviously someone who has been a stalwart of the game. He’s been an unbelievable player for South Africa. The plan was to give him a couple of short balls and if we could tie him up a bit outside off stump he might fish at one. Fortunately that worked.”

Cummins said that although he would “love” to play as many Test matches as possible, he was not taking anything for granted, especially not being selected for Australia’s first home Test of the season starting in Brisbane on December 1.

“We’ll have to see what happens. Ryan Harris has gone home and hopefully he’s got his injury right and he’ll be right to go in Brisbane. It will be up to the selectors.” Cummins even showed an ability to win over the media saying he hadn’t yet turned on his phone to make contact with anyone in Australia.

“I pretty much came straight here. I thought this was more important,” he said to laughter from journalists at a post-play press conference.((AFP)

DDCA officials involved in ugly dispute ahead of elections