He has now been instated as a national selector.

Pakistan Cricket Board (PCB) on Thursday removed Muhammad Akram as the bowling coach of the national team while giving him the fresh responsibilities of being a member of the national selection committee and head coach at the National Cricket Academy in Lahore.

As expected, Akram, a former Test pacer, was removed as bowling coach in the shake up in Pakistan cricket as the PCB also announced five members on the selection committee which is headed by former Test captain Moin Khan.

The announcement was made in a statement issued by the Board.

Akram was associated as bowling coach of Pakistan team since 2011 but with former fast bowler Waqar Younis expected to become the new head coach, the PCB apparently has had a change of plans for the team management.

A reliable source said that Haroon Rasheed, who is Director of Game Development in the Board, may also be inducted on the selection committee as co-opted member, meaning he will not be paid as a selector.

The PCB had earlier announced that it would hold a month long intensive training camp at Lahore from May 6 to June 6 to prepare the best players and finetune them for the rigours of international cricket.

With the exception of Moin, who was until recently head coach of the national team, Akram and Shoaib Muhammad, who was the fielding coach in Asia Cup and World T20 in Bangladesh, others like Wajahat, Ejaz and Yousuf make a comeback to the Board after a long time.

RCB need 18 off the last 2 overs against KKR 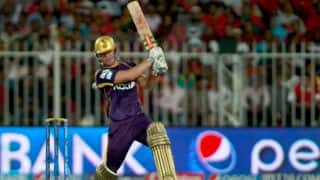