"I don't want to go there, then we will bring politics. Cricket teams always go to the Wagah Border."

Pakistan Cricket Board (PCB) chairman Najam Sethi on Wednesday refused to attach any importance to Pakistan cricketer Hasan Ali‘s signature wicket-taking celebration during the flag-lowering ceremony at the Wagah border that did not go down well with India’s Border Security Force (BSF).

“I don’t want to go there, then we will bring politics. Cricket teams always go to the Wagah Border. I don’t attribute any importance to it,” Sethi said on the sidelines of the five-day ICC meeting here.

Few days ago, a video of Ali taking part in the beating retreat ceremony, which is performed by troopers from the BSF and Pakistan Rangers every evening at the Wagah border, went viral on social media.

In the clip, the Pakistan pacer was seen patting his thighs and raising his arms before breaking into the kind of unique celebration he does on the cricket field after claiming a wicket, as troopers of the Pakistan Rangers stood in the background.

He was later escorted back by a man in civilian clothes amid thunderous applause from the audience.

The BSF has decided to lodge an official protest with Pakistan Rangers over the breach of a protocol. 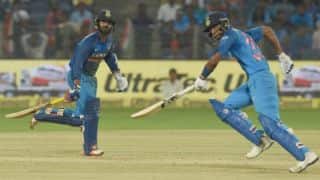