Pakistan's former captain, Wasim Akram has advised the PCB and the national team management to not treat the players like schoolboys during the tour of India. Pakistan‘s former captain, Wasim Akram has advised the PCB and the national team management to not treat the players like schoolboys during the tour of India.

Responding to remarks made by the Pakistan team manager, Naved Cheema that players would not be allowed free movement or to attend private parties or functions in India, Akram said today that if they were made to feel like they were in jail in India it would affect their performances.

“I don’t agree with this approach. I think the players should be given space and freedom. If they are relaxed and open minded they will perform better as well,” Akram said.

“I know due to the spot-fixing scandal and increased media glare things have changed in international cricket but still players must be given responsibility,” he added.

Akram said that during the time of Imran Khan, players were relaxed as the captain and management didn’t place undue curbs on their movement.

“It was only one day before a match or during the match that we knew we had to adhere to strict timings but otherwise there were no bars on us and the players also realised their responsibilities,” he said.

Akram said the PCB needed to give more responsibility to players.

“In India Pakistani players are popular and it is a great experience touring India. I have been there with the national team a number of times. I say don’t turn it into a jail for the players.”

He also dismissed talk of Pakistan being the favourites in the coming T20 and ODI series, after India had lost at home to England in the Test series.

“Tests is something different and India will have a different team for the limited-over games. But even otherwise I know from experience that once the toss is done both teams start off on a even kneel in any match that is the beauty of Indo-Pak contests. The past or past performances don’t matter at all.”

The former fast bowling great was pretty sure the Pakistan team would encounter flat batting wickets in the series.

“Our advantage is that we have experienced bowlers like Umar Gul and Saeed Ajmal who bowl well even in such conditions.”

On the proposed tour by Bangladesh to Pakistan, he appreciated the efforts being made by the Bangladesh Cricket Board to send a team to his country.

“They were supposed to come in April (but) they didn’t come… now they are saying they will come. Regardless of everything I appreciate the fact that they are at least trying to send a team. Even if some of their senior players don’t come what is important is that international cricket will return to Pakistan.” 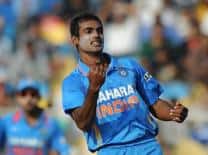