Shahid Afridi may assume the position as he has led the side in the past.

The Pakistan Cricket Board (PCB) will announce its new national Twenty20 captain on September 16 and by that time it also hopes to finalise a pool of players for the World Cup. Shaharyar Khan, who heads the board, told reporters in Lahore that before September the selectors and the board will complete its homework on both issues.

“On September 16 we will have our Board of Governors meeting after which we will announce the national T20 captain and also the World Cup pool of players,” Khan said. Flamboyant all-rounder, Shahid Afridi is tipped to once again be named the T20 captain after Muhammad Hafeez stepped down this year after the T20 World Cup in Bangladesh.

Hafeez said on a Geo News channel show that he had stepped down because he felt he had let down the people when Pakistan was unable to reach the semi-finals of the T20 World Cup for the first time since the inception of the tournament.

“It was my personal decision and I took full responsibility for the team’s performance,” Hafeez said. He also made it clear that he had not given up on the captaincy as he hoped to play for five more years for Pakistan.

But in the PCB corridors of power for the time being Hafeez is not being reconsidered for the captaincy and according to sources Afridi appears a strong bet because of his past experience as captain as well.

“Afridi is a strong candidate because if he leads the T20 side against Australia and New Zealand than the PCB have a ready replacement for the One day team captaincy if Misbah-ul-Haq continues to struggle with the bat in the two coming series,” one well informed source said.

Shaharyar Khan also said that the BOG members would be taken into confidence on key decisions. “I am a strong believer in continuity and stability in cricket matters. So any changes will be looked at after the World Cup next year,” he added.

It is no secret that Khan is not in concurrence with some of the decisions taken by his predecessor, Najam Sethi like appointing a six member selection committee, giving Moin Khan the dual role of chief selector and manager and the heavy duty team management.

The PCB chief said the pool of players for the World Cup was being finalized so that their performances leading up to the World Cup could be closely monitored. “But selection of teams is only domain of the national selectors not the board.”

The pool of players could include some sidelined players like Shoaib Malik, Kamran Akmal, Muhammad Sami, Yasir Shah etc. 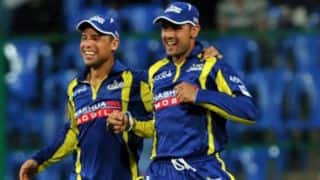