Khan said the PCB was satisfied with Aamer's rehabilitation.

Pakistan’s cricket chief on Tuesday said that an appeal will be lodged with the anti-corruption unit to clear the way for seamer Mohammad Aamer to play domestic matches before his five-year ban expires.

The International Cricket Council (ICC) on Monday revised its anti-corruption code which means that banned players can feature in home matches a few months prior to the end of their ban, specifically benefitting Aamer.

The ICC said it will be up to the home board, the Anti-Corruption Security (ACSU) chairman Ronnie Flanagan and ICC Board to take the final call. Aamer’s ban expires in August 2015.

The 22-year-old bowler was banned alongwith then captain

and pace partner Mohammad Asif for accepting money in return for deliberate no-balls during the Lord’s Test against England in 2010.

The trio were also jailed in Britain. Pakistan Cricket Board (PCB) chairman Shaharyar Khan said his board was in the process of filing an appeal. “The ball is in our court now,” Khan told AFP on the sidelines of the first Test between Pakistan and New Zealand. As soon as the code was revised and passed we started to prepare a paper and in the next few days we will send it to the ACSU chairman and he will decide,” said Khan.

Khan said the PCB was satisfied with Aamer’s rehabilitation, made mandatory for the banned players by the ICC tribunal.

“We are satisfied that Aamer has done the rehab and from the beginnig he was co-operative and the case was ready for us and we hope that in the next ICC meeting on January 26 we will have a final decision,” said Khan, a former diplomat. “The way is open for Aamer’s return.”

Before the ban, Aamer was playing for leading Pakistani team National Bank, but his employers terminated his contract after he was banned. Khan said Butt and Asif have not done enough rehab to warrant the same relaxation.

“The other two players have not shown the remorse or they have not helped others to avoid this pitfall, Aamer has done that so his case is different from Butt and Asif and we have told the other two that until their rehab is not completed they will not get that relaxation,” said Khan.

Butt and Asif last week objected to the help offered to Aamer and had claimed that they had finished their rehab. 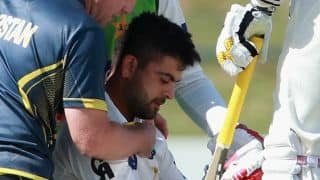