The PCB has also said it is going to invite a foreign curator to supervise preparation of sporting tracks.

The PCB is not satisfied with reported comments made by the chief curator at the Dubai Sports city that a bouncy pitch has been prepared for the Test series between Pakistan and Australia. The PCB has reacted to comments by Tony Hemmings that he had prepared a bouncy track for the two-match Test series next month.

“The PCB has already sent a letter to the Dubai sports city drawing their attention to Hemmings’ comments and to the fact that the series was a ‘home’ one for Pakistan,” a well- informed source told PTI.

“The PCB has stated that they have specific ally asked for slow pitches which assist spinners for the Tests in Dubai since it is their ‘home’ series,” the source added.

Another source said the PCB’s reaction was understandable since they paid a handsome fee to the Dubai sports city organisers for renting the ground for international matches. “The Pakistan team management has been preparing for the coming series against Australia with lot of stress on attacking through spinners. So they have got a shock after reading Hemmings comments,” the source added.

Pakistan has been playing its ‘home’ series in the United Arab Emirates in Dubai, Abdu Dhabi and Sharjah due to security concerns since the 2009 militant attacks on the Sri Lankan team bus in Lahore.

“The PCB spends a lot of money on making UAE its neutral venue for hosting foreign teams and they have understandably had a say in preparation of pitches.”

In 2012 Pakistan whitewashed England in a three-match Test series on slow and turning tracks and also beat South Africa last year on similar tracks. The source said the PCB had decided to send its chief curator to Dubai to look at the pitch conditions there and work with Hemmings. The PCB has also said it is going to invite a foreign curator to supervise preparation of sporting tracks for domestic cricket in the country. 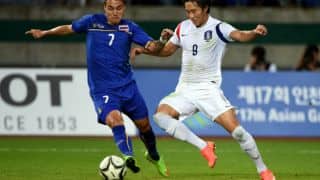