Former India captain Sourav Ganguly says Sachin Tendulkar should end his last series against Australian by getting his 100th international century in Adelaide, the city of legendary Don Bradman. 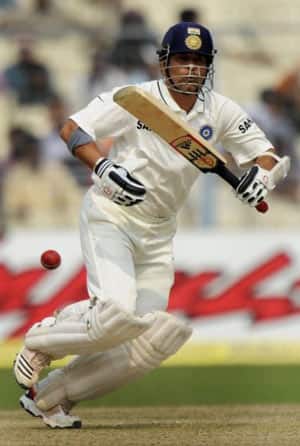 Sourav Ganguly said it could be Sachin Tendulkar’s last Test in Australia — a country in which he has earned the biggest respect, and very rightly so — and the little champion has a massive opportunity to finish Down Under in a good fashion Getty Images

Former India captain Sourav Ganguly says Sachin Tendulkar should end his last series against Australian by getting his 100th international century in Adelaide, the city of legendary Don Bradman.

Tendulkar was batting on 12 and Gautam Gambhir on 30 as India were 61 for two in their first innings in reply to Australia’s 604 for seven declared after the second day’s play of the fourth and final Test at the Adelaide Oval.

Ganguly said a lot will depend on Tendulkar and Gambhir to save the Test for India.

“It has Tendulkar and Gambhir at the crease — two players who have looked good in the series — and it will be up to them to take India forward. India has a lot of distance to cover. It needs two hundreds to get close to Australia’s total.

“It could be Tendulkar’s last Test in Australia — a country in which he has earned the biggest respect, and very rightly so — and the little champion has a massive opportunity to finish Down Under in a good fashion. I don’t know whether the burden of 100 centuries is weighing him down but a 100th hundred hit in the state of Sir Donald Bradman would be fitting,” said Ganguly.

Ganguly said in a country where Tendulkar is hugely respected, all eyes will be on him, not only for himself but also to see his team through.

“The stage is set — perfect batting conditions on day three of the game and a lot to play for,” Ganguly was quoted as saying by The Age.

Ganguly said Australia in no way can lose the match and gave credit to Ricky Ponting and Michael Clarke to take the hosts to a commanding position.

“It was a fantastic display of batting yesterday by Ricky Ponting and Michael Clarke and they have put Australia in a commanding position. When a team scores 600 runs in an innings in a Test, it normally shuts out one result – a loss for that team – and leads to only two results – a win or a draw for that side,” he said.

Ganguly was surprised to see the decline in stand-in captain Virender Sehwag’s determination.

“Sehwag once again got out to a loose shot, as we say in sports. There has been a remarkable decline in his determination in the last few years overseas. He has never been a player with lot of footwork but he made up for that with other attributes, such as his enormous hunger to succeed. At the moment, it looks like being on the decline. In the past, he has treated such deliveries with disdain but somehow he has managed to get himself out to ordinary deliveries,” he said.

Ganguly also wondered how Rahul Dravid is getting bowled out in all the Tests.

“For Dravid, the problem of the ball rattling the stumps continues. I can’t remember him getting bowled so many times in his career and it’s becoming a worry for him and a lot of people connected with the game.

“He just seems to get surprised by the deliveries coming into him and the bat face turns, which allows the ball to go through. That fluency of the footwork has gone completely missing and he will have to work very hard to get it back,” he said.(IANS)

ONGC, DY Patil A make it to the quarters of All-India T20 Tournament