Handscomb has extended his association with Melbourne by signing a two-year deal with the franchise ahead of the Big Bash League.

Australia batsman Peter Handscomb has extended his association with Melbourne by penning a two-year deal with the franchise ahead of the KFC Big Bash League|08. The 27-year-old, who joined the franchise in 2015 and has since featured in 30 BBL games for the Stars over the years and scored 453 runs, will make up for the absence of English stars Luke Wright and Kevin Pietersen, who are no longer part of the side.

Handscomb has played 13 Tests and eight ODIs for Australia and the Stars could do with someone of his calibre. “I’m really happy to re-sign with the Stars,” Handscomb said. “I have a lot of friends here and to get to play with the likes of (Marcus) Stoinis, (Scott) Boland and (Adam) Zampa again is something that excites me.

“We’re a pretty close group and there are a few of us that have played together for the last three or four years, so we’ve gotten to know each other quite well both on and off the field. We also have some new faces at the club and we’re really looking forward to welcoming them to the Stars family.”

Handscomb s addition adds strength to the Stars line-up which already includes the likes of Glenn Maxwell, Mic Maddinson and Ben Dunk. Handscomb is coming off impressive knocks in the JLT Cup where he scored 361 runs in seven innings, including four half-centuries in a row. Playing for Victoria, Handscomb scored 80 in the semi-final against Western Australia and 49 against Tasmania in the final as the side emerged victorious.

“It was a major focus for us to lock in Pete along with Marcus Stoinis,” Trent Woodhill, Stars List Manager said. “These two guys along with Glenn Maxwell, Nic Maddinson and Ben Dunk will provide us with a strong batting spine that features an array of quality local batters.

“We think that Pete is someone who can dominate this tournament, as seen by his century against the Scorchers, and from the recent JLT Cup, we know that he is in good white-ball form. We also know that Pete has strong leadership skills he’s proven himself as a leader not just at the Stars but in his role as captain of Victoria.”

The Stars open their campaign against Sydney Thunder on December 21. 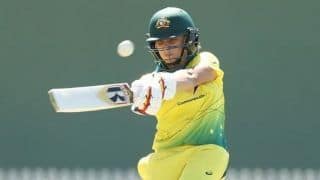