The ex-England coach sacked after a row with Kevin Pietersen has said there's no need for the batsman to have a "love-in" with his team-mates if he is to resume his international career. 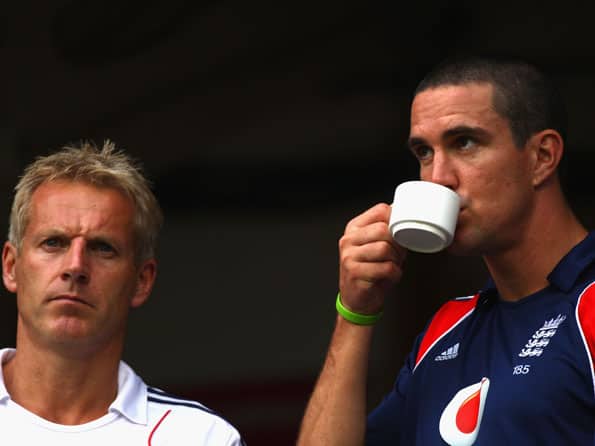 The ex-England coach sacked after a row with Kevin Pietersen has said there’s no need for the batsman to have a “love-in” with his team-mates if he is to resume his international career.

The England selectors were due to meet on Tuesday to pick their squad for the upcoming four Test tour of India, with the party set to be made public Thursday.

Pietersen, England’s most talented batsman, remains in international exile following a series of flare-ups that led to him being dropped following the drawn second Test at Headingley last month.

Although Pietersen made a brilliant, match-saving, 149 against his native South Africa, he was axed after it was revealed he’d sent “provocative texts” to opposition players, some of which were allegedly critical of then England captain Andrew Strauss.

Pietersen has not played for his adopted country in any format since and will miss this month’s World Twenty20 in Sri Lanka, despite being the man of the tournament when England won the 2010 edition in the Caribbean.

However with Strauss having now retired — a decision he insists was not influenced by the latest controversy engulfing Pietersen — and England needing to find an opener to replace him alongside new captain Alastair Cook, the top order could struggle if his absence continues heading into an Ashes year.

Moores lost his post as England coach in 2009 after then captain Pietersen — who later had to resign — said he wasn’t up to the job.

New coach Andy Flower and Strauss then formed a successful alliance that took England to home and away Ashes triumphs and the world number on ranking, which they recently lost to South Africa.

“You don’t need to have a love-in but you need to respect each other,” Moores, now coach of Lancashire, told BBC Radio’s Test Match Special.

“It’s not an easy decision. I know Andy (Flower) very well and he’ll be desperately keen, as will Alastair Cook, to do well in India. They’re very competitive people.

“Andy’s assessment is what has he got behind the scenes. No one on the outside can know that. In some ways going to the subcontinent couldn’t have come at a tougher time.”

The 32-year-old Pietersen’s desire to play more often in the lucrative Twenty20 IPL has been central to his recent dispute with the England and Wales Cricket Board (ECB).

In a recently published interview with the Cricketer magazine, he said of the IPL: “Every board has accepted it apart from the ECB. Some part of international cricket may have to give as the IPL is not going away.”

Pietersen, whose average of nearly 50 in Tests means he is on the verge of joining the game’s greatest batsmen, is also understood to be unhappy at what he believes is the involvement of several England team-mates in a mocking fake Twitter account, KP Genius, that has since been closed down. (AFP)