Nevill said making his first Test appearance at Lord's, the 'home of cricket' was an added bonus.

London: Australia wicketkeeper Peter Nevill admitted to mixed emotions ahead of his international debut in the second Ashes Test against England at Lord’s on Thursday. Nevill was given his chance after first-choice gloveman Brad Haddin, who played in Australia’s 169-run defeat by England in the first Test in Cardiff last week, withdrew for “family reasons”. “It is a unique circumstance, my thoughts are with the Haddins, but it is a tremendous honour and privilege to play for your country and to wear the illustrious baggy green,” said the 29-year-old Nevill, also Haddin’s understudy at New South Wales.

“It’s the thing dreams are made of really. I really feel for Hadds, he’s someone I’ve been very close to, but it’s not for me to speak any further on that matter.”

Australia’s new gloveman said he had a good example to follow in the 37-year-old Haddin, who had to wait his turn for international cricket behind Adam Gilchrist. “I think Hadds was a good example of that, someone who had to wait quite a while for his first Test match, he was a similar age (to me). But it’s something that has become a realistic possibility over the last few years, and to get there and do it is great.”

Nevill said making his first Test appearance at Lord’s, the ‘home of cricket’ was an added bonus.

“It’s special just being here. It’s a tremendous ground, I’ve stepped foot on it before, but I’m really looking forward to playing on it. Nevill will have at least one familiar face in a capacity crowd to cheer him on. My father’s making the dash over, so he should arrive in time. He was actually in Perth on business so had to duck back to Melbourne and board a flight for London.”

Lord’s can be a tough ground for wicket-keepers because of the amount the ball moves after going past the stumps but Nevill backed himself to rise to the challenge.

“Like any foreign conditions there’s unique challenges, and the (tour) game at Essex was a great opportunity as was the (practice) game on the Isle of Wight to adjust to those conditions,” he said. “I’ve learnt a lot and I’m looking forward to performing for my team.”

Nevill scored 764 first-class runs at an average of 76.40 during the last Australian season, including an unbeaten 235 against Tasmania in Hobart and completed 34 dismissals in the domestic Sheffield Shield. He began his career at Victoria but switched states after his path was blocked by Matthew Wade. Australia captain Michael Clarke backed Nevill to succeed, saying Wednesday, “That’s the reason you pick a second wicketkeeper.

“I’m really confident we bring someone in who is in really good form.”

Haddin’s decision to withdraw was not the first time he has put his family ahead of his cricket career. In 2012, Haddin took several months out of the game after his then 17-month-old daughter Mia was diagnosed with neuroblastoma — a rare form of cancer. As his daughter’s condition improved, Haddin returned to international cricket during Australia’s losing 2013 Ashes tour of England. 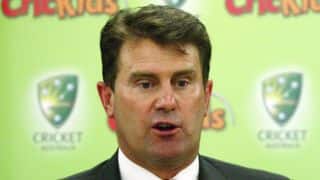 Australia need a good day to bounce back in Ashes 2015, feels Mark Taylor