Australia pace spearhead Peter Siddle thinks his side will still be able to force a draw in the ongoing second Ashes 2013 Test at Lord’s, despite England taking a mammoth 566-run lead in the second innings. 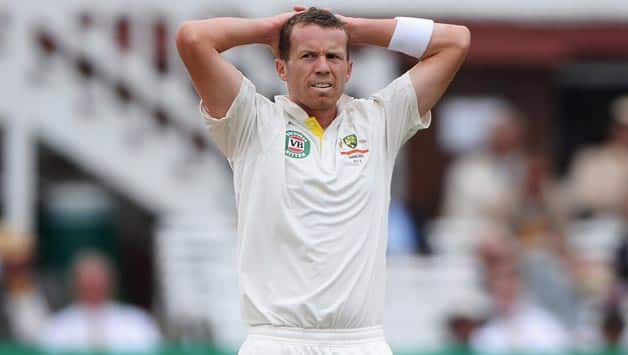 Australia pace spearhead Peter Siddle thinks his side will still be able to force a draw in the ongoing second Ashes 2013 Test at Lord’s, despite England taking a mammoth 566-run lead in the second innings.

The right-arm pacer expects England to keep on batting on the fourth day morning, and thinks Australia can save the Test with five more sessions to go.

“It is disappointing, yes, we do expect as a whole to bat longer. It’s not just the batters at the top it’s the whole line up, we could all do a lot better and it’s something we have to work on. We could have bowled better at times as well. It’s a whole all round performance, we haven’t been great for a lot of this Test match and that has put us in the position we’re in,” Siddle was quoted as saying by the Sydney Morning Herald.

He added: “You can go back to yesterday morning and we needed three wickets [to finish England’s first innings] and we let them smash out 70 runs off 12 overs and that wasn’t ideal at all. Little moments like that are costly.

“We go out there and we’re chasing 300 instead of 360, it’s a totally different circumstance. We have all got to be accountable. We’ve got to stand up for the rest of this match now, perform to the best of our ability and try and take something out of this match,” he said.

“There is still a lot at stake. If we play well, good patient cricket out in the middle, I think we can draw this match, maybe even win it, you never know, it’s only four and a half an over, it’s doable,” Siddle expressed.

Siddle defended Australian bowlers who failed to break a stubborn stand between Joe Root and Tim Bresnan in the first session on Day Three, and remained inaffective the entire day.

“We haven’t bowled an extreme amount of overs today [Saturday]. Obviously it’ll be a good work out for everyone I think. We’re not too bad. Obviously it’s not ideal to be out in the field every day but that’s Test cricket.

“Whenever we get that bat we have to be patient, take out time and do the same to them. Make them spend some time out there and bowl some overs. We want to give them a little bit back of what they have been giving us,” Siddle concluded.