Australian pacer Peter Siddle has insisted that he is not concerned about selection in the playing XI which would be taking on South Africa.

Melbourne: Australian pacer Peter Siddle has insisted that he is not concerned about selection in the playing XI which would be taking on South Africa for the three-match Test series starting next week. Chairman of selectors Rod Marsh surprised everyone by including uncapped fast bowler Joe Mennie, who plays for Redbacks, in the 12-man squad for the Perth Test starting from November 3. The squad, announced on Friday, includes four pace bowlers Mitchell Starc, Josh Hazlewood, Siddle and Mennie although only three are likely to play in the opening match. Coming off a long-term injury, all it was about was getting back and playing cricket, not worrying too much about selection and all that kind of thing. I knew once I was fit and up and going, that the selection would look after itself. It was just a matter of getting the body right, news.com.au quoted Siddle as saying. FULL CRICKET SCORECARD: Australia vs South Africa, 1st Test at Perth

The 61-Test veteran, who has not played in the longest-format of the game since February in New Zealand, returned to action in the domestic one-day cup earlier in October after an eight-month layoff with ankle and back injuries. Ahead of the opening Test at the WACA, the 31-year-old hopes that the Perth pitch would be more lively than last year s road-like surface. Peter Siddle set for comeback, says Matthew Wade

He, however, backed Mennie s inclusion in the 12-man squad saying the 27-year-old bowler has proved his credentials with good performances for Australia A after he was the Shield s leading wicket-taker last summer. His figures show that he deserves it, Siddle said. 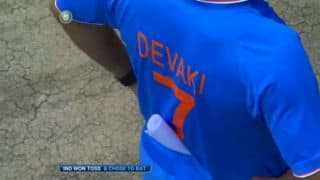 MS Dhoni and Co. decide to wear their mother's name on jersey during 5th ODI vs New Zealand 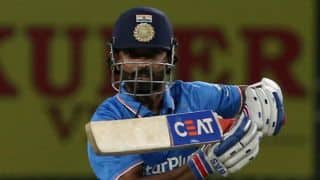