Phil Hughes, who represented the national team in 26 Tests between 2009-2013, collapsed after a delivery from New South Wales pacer Sean Abbott hit his helmet during a Sheffield Shield match at the Sydney Cricket Ground.

Hughes was carried off on a stretcher and treated on the boundary before being rushed to a hospital where he underwent surgery. The match was abandoned following the incident.

Cricket Australia (CA) chief executive officer James Sutherland expressed concern over the condition of Hughes.”Our thoughts and prayers are with Phil Hughes right now. We are also thinking of his family, teammates and friends in the Australian cricket family. His welfare is our highest priority. We’re also naturally concerned about all of those involved in today’s game and will be giving them our utmost support,” Sutherland said.

Australian Cricketers’ Association (ACA) chief executive officer Alastair Nicholson also expressed similar sentiments. “We were obviously shocked to learn of the seriousness of the incident involving Phil. While we have faith that he’s receiving the best available treatment, the situation will impact his family, friends, and those directly involved on the field,” he said.

Australia coach Darren Lehmann also lent support to the batsman. “Our thoughts and prayers are with Phil and his family. He is a great fighter and a great young man,” Lehmann tweeted.

Read Head and face injuries in cricket — Part 1 of 3 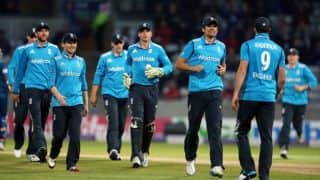 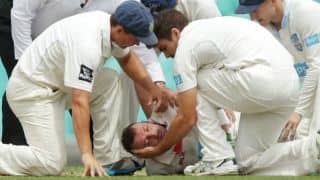