Middle-order batsman Phil Hughes said that being left out of the Australian side in the ongoing Ashes series has been much easier for him to come to terms with than being left out against New Zealand two summers back. Middle-order batsman Phil Hughes said that being left out of the Australian side in the ongoing Ashes series has been much easier for him to come to terms with than being left out against New Zealand two summers back.

“It’s never easy to be dropped, but I feel that one was tougher than this one,” Hughes was quoted as saying by Sydney Morning Herald.

“And I’m being really honest about that… I probably scored one of my better Test innings [in the first Test], so it’s something I’m not overly concerned about.”

Hughes scored 84 against Sussex and has done well in most of the warm-up matches that the Australians have played.

“I feel my game is in a really good place. Also I got runs [in the tour match against] Sussex as well, and I suppose the games that have been on tour in Worcester, Somerset and Sussex I feel like I’m hitting the ball well.

“But I did miss out and had a real poor game at Lord’s, and the selectors… I suppose they’re trying to find the best combination and I wasn’t in that for the last two games and I respect that.”

“Hopefully, I can get back in the side sooner rather than later. I feel like my confidence isn’t shot at all. I feel confident with my game.”

The 26-year-old made an unbeaten 81 in the first Test at Trent Bridge and was involved in a record partnership for the last-wicket with Ashton Agar. But after David Warner returned from Africa, Hughes was left out of the team.

“The bottom line is I got three low scores after my 80. I didn’t have an ideal game at Lord’s,” he said.

“If I’d had a better game there, I wouldn’t see myself in this position, there is no doubt about that. I’m a realist, I know I didn’t score runs there and I was left out of the last two teams.

“It’s about moving forward and it’s about getting runs. Hopefully, if I can get an opportunity in this two-day game [against England Lions], I can get a big score and put my name up there again,” he concluded. 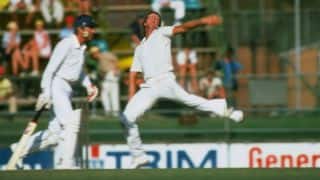