Hughes was unbeaten on 63 when the incident happened.

Australian batsman Phil Hughes was in a critical condition in hospital Tuesday after being hit on the head by a bouncer in a Sheffield Shield match.

Looking to press his case for a recall to the Test side, the South Australian opener, who was wearing a helmet, had scored a composed 63 when he was hit by a ball from Sean Abbott while attempting a pull shot.

Television images showed him standing dazed, looking at his feet before crashing face-first onto the pitch. New South Wales players and the umpires quickly rushed to his side and called for help immediately.

“The patient suffered a critical injury and was transported to St Vincent’s Hospital in a critical condition,” an Ambulance NSW official told AFP.

Cricket Australia said in a live match blog on its website that Hughes had “been leaving the short balls, had a go at this one, misjudged it and hit in the head. He blacked out and fell badly”.

Medical staff worked on the 25-year-old, reportedly including mouth-to-mouth resuscitation, for more than 30 minutes before he was taken from the field ahead of a helicopter landing on the pitch.

“Clearly the priority is Phil’s health and we want to keep his family fully informed. We don’t have any updates on Phil’s health at the moment,” a Cricket NSW spokesman said.

South Australian cricket officials said a statement was expected to be issued shortly.

Play was suspended in the game and then abandoned for the day.

Hughes has played 26 Tests but has never secured a regular place in the team, partly due to his perceived weakness against the short ball.

But with doubts over the fitness of captain Michael Clarke for the first Test against India next month in Brisbane, he was seen as a potential replacement.

Serious concerns for Phil Hughes after he was hit on the side of the head by a bouncer http://t.co/GIrdhsHtUO pic.twitter.com/d75OWjGJ4M

WARNING GRAPHIC IMAGE: The moment Phil Hughes collapsed on his face after being struck by Abbott #Hughes pic.twitter.com/P9sdZdxUFn

Photo: Phil Hughes knocked out cold and carried by a helicopter off the ground. Hope all is well and champ… http://t.co/Epg0OftRrn

Cricket Australia’s CEO James Sutherland expressed his condolence on the incident via a press release. “Our thoughts and prayers are with Phil Hughes right now. We are also thinking of his family, team mates and friends in the Australian cricket family. His welfare is our highest priority. We’re also naturally concerned about all of those involved in today’s game and will be giving them our utmost support.”, he said.

“We were obviously shocked to learn of the seriousness of the incident involving Phil.   While we have faith that he’s receiving the best available treatment, the situation will impact his family, friends, and those directly involved on the field. The ACA is therefore working closely with CA to arrange the appropriate counselling for those affected.  Naturally our thoughts are with him and we wish him well from all the ACA members.”, said Australia Cricketers’ Association CEO Alastair Nicholson. 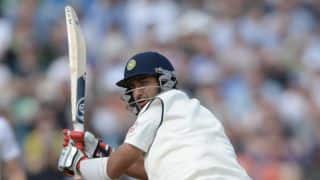