Phil Hughes' death has pushed the administrative bodies to review safety in the sport.

The Pakistan Cricket Board (PCB) is set to carry out its own review of the protective gear it provides to the national team players following the tragic death of Australian batsman Phil Hughes this week.

A official of the board told PTI that presently the PCB ordered protective gear specifically Australian made helmets for the players of the national team. “At the moment the policy is that we order these helmets from Australia for the players who graduate into the national team. And after the Phil Hughes tragedy we will be asking our medical board and the players to review whether the protective gear they are using are up to the mark,” the official said.

He said one major problem the board faced was that while it supplied the helmets to the Pakistan team players but many of them resorted to using helmets of their own choice. “We did try to get them to use only the helmets we provide them but it was not practically possible since many of them are more comfortable with the helmets they order themselves according to their requirements,” he said.

The official stated but after the Phil Hughes incident the board had decided to review the matter again. “The ICC had also formed a medical commission to review the protective gear available to players these days but after some meetings it came to a standstill,” he added.

The official said that the board’s chief medical officer, Dr Sohail Saleem was on that ICC medical commission . “We have asked Dr Saleem to start a review because right now there is concern that the visors or grills used by players are not strong enough to keep out a ball,” the official said.

Hughes died in a Sydney hospital this week after three days of self induced coma after being hit by a short pitched ball in a domestic match in Australia. The PCB official said similarly steps would also be taken to carry out a review of the protective gears used by teams and players in domestic cricket.

“The Phil Hughes incident is a big tragedy and everyone has been shaken by it but I think the cricket community needs to learn from it and focus on ensuring manufacturers provide the best protective gear,” he said. 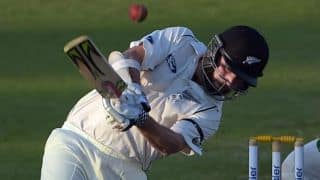