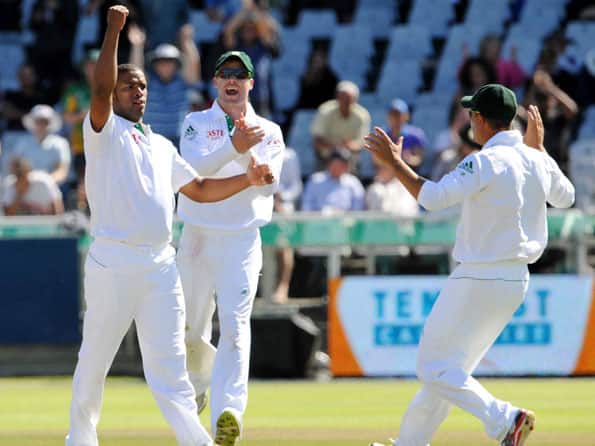 After a three-hour rain delay, Philander bowled Australian Michael Clarke in the fourth over of the day after only three runs had been added to the overnight 142 for three.

Australia suffered a major blow 20 runs later when Ricky Ponting was caught at second slip off Morne Morkel for 62, having added only eight runs off 34 balls as the bowlers took advantage of helpful overcast conditions.

But Mike Hussey and Brad Haddin put together a watchful sixth wicket partnership of 50 and with the sun starting to beat down on the ground the odds seemed to be swinging slightly in favour of Australia.

There was yet another twist in a match of fluctuating fortunes when Philander was brought back shortly before tea and trapped Hussey leg before wicket for 39 with a ball which swung into the left-hander.

Hussey sought a television review but there was no reprieve as umpire Billy Bowden’s decision was shown to be correct. Hussey batted for 124 minutes and faced 77 balls.

Philander had figures of four for 50 at tea.

It left Haddin and the hard-hitting Mitchell Johnson as Australia’s not out batsmen. Haddin was on 24 but seldom looked secure as he played and missed several times and was hit on the helmet by a bouncer from Dale Steyn.

South Africa, who won the first Test in Cape Town by eight wickets, have not won a home series against Australia since 1969/70. (AFP)