Simmons, a former Test player, said the team had not taken on the criticism.

Bridgetown (Barbados): West Indies head coach Phil Simmons has praised the character of his side after they beat England by five wickets in the third Test here Sunday, to level the three-match series.

Set 192 for victory, the West Indies reached their target late in the evening at Kensington Oval on Sunday at the Barbados National Stadium, to record their first win over England in six years and only the third in the last 15 years, reports CMC.

And Simmons, who took over at the helm of the squad just before the start of the series, said the victory meant a lot to the side, especially following the results in the first two Tests. Updates: West Indies vs England, 3rd Test at Barbados

“I can’t say about [what it means for] West Indies cricket in general but I know for the Test team it’s been huge because the guys have worked hard for the last four weeks,” Simmons told a post-match media conference on Sunday.

“To have played so well in Antigua and Grenada and not come out with anything, you saw the determination of the guys – especially the bowlers – to come out of this with something so it’s huge for us.”

He added: “That’s the biggest thing I can take from it that everybody showed character because for the bowlers to bowl out England for such a low score in the second innings, just shows massive character coming out at this early stage of my tenure so it’s great for me to see.”

The West Indies came in for criticism before the series, with England and Wales Cricket Board (ECB) chairman Colin Graves describing the Caribbean side as “mediocre” and saying he expected England to easily win the contest. Scorecard: West Indies vs England, 3rd Test at Barbados

Simmons, a former Test player, said the team had not taken on the criticism and noted the victory now sent a strong signal to the critics.

“Let him decide that [mediocre comment] now, I’ll leave that for him to judge,” Simmons quipped.

“I think when he’s walking out he’ll see a few signs going out there with the meaning of it so I’ll leave that for him.”

And like Graves, Simmons said he believed the West Indies were underestimated by the media, who were now likely to heap pressure on his opposite number Peter Moores.

“I suppose the criticism will come because the media will see it as number three playing number eight. I think we were [underestimated] by the media and Colin Graves’ statement showed it that there was an underestimation of what we can do,” the Trinidadian explained.

“I don’t think it was done by the [England] team but he’s going to come into that sort of criticism because it’s number three playing number eight.”

The West Indies drew the first Test at the Vivian Richards Cricket Stadium in Antigua before losing the second at the Grenada National Stadium last week by nine wickets. 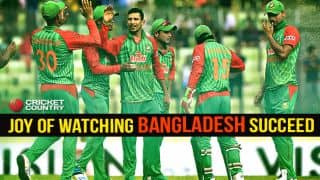