The tragic passing away of Phillip Hughes is still fresh in the bowler's minds, says Cummins

Pacer Pat Cummins has admitted the mode of Phillip Hughes‘ tragic death is still in the back of the minds of Australian pacemen as they continue to bowl bouncers in cricket matches.

Cummins was a former team-mate of the left-handed batsman for New South Wales and Australia, but was not playing in the ill-fated match against South Australia when when Hughes met his tragic death at the Sydney Cricket Ground.

“I think it definitely does make you think twice. The first couple of weeks initially, certainly I couldn’t even fathom bowling a bouncer. Now, once you get into a competitive situation, you kind of try and put that out of your mind,” he was quoted as saying to the Sydney Morning Herald on Tuesday.

“I think most of the guys are trying to not think about it and trying to take it for the freak accident that it was and go back to cricket. But I think certainly it is in the back of most people’s minds.”

“I don’t think anyone knows how they would react until they get put in that situation. But it is still quite raw I guess,” the 21-year-old.
Cummins is currently out of the Test squad but is in reckoning to be selected for Australia’s 2015 World Cup squad, after showing impressive form in the ongoing Big Bash League (BBL). 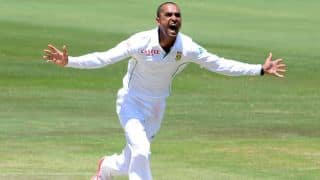